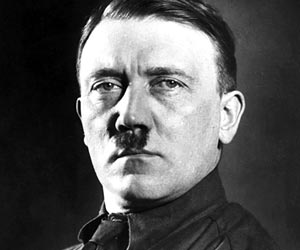 Today we celebrate with arms outstretched in utterly ecstatic glee the bizarre Berlin suicide 73 years ago of that Cosmic Herostratus, World Garbage Mouth and Nihilistic Ruiner of All Things Adolf Hitler, who took his own life with poison even as Soviet commandos surrounded his concrete bunker. In barely two decades, this monstrous little solipsist had – from the very furthest fringes of the German Empire – waltzed via many circuitous and highly dubious not to mention unlawful routes into World Politics, only to pop a pill into the afterlife when it all got too hot for him.

Greeted as a religious figure by a post-Versailles Treaty German population in a somewhat justifiably gigantic and collective downer, Adolf Hitler’s movie star fringe, open top Mercedes and hunky leathered-up bovver boys gave the Nazis – in the chaos of inflation-crazy jobless Germany – a massive sartorial style hoist above their strictly functional Communist opposition. But only an idiot savant would, during the mid-1920s, have predicted that this monomaniacal army-endorsed beerhall agitator could have carved any real place in the historical future of Germany. Because of his uncanny rise to power, deployment of the swastika and incredible propaganda movies, many have tried to explain in near occult terms how Hitler captured the mind of average Germans. But in truth he did no such thing. Instead, Adolf Hitler was courted, groomed and guided into power by all manner of rich Germans, high society misfits and – most significantly – through gross failings in the System. Indeed, Adolf Hitler’s 1933 election as Germany’s Chancellor was achieved only through the greatest failure of Germany’s Democratic System. Only when he was safely (and lawfully) in power, did Hitler unleash the real might of the Nazi propaganda machine upon the German public. And although we often marvel today that the Allies successfully brought Hitler’s projected 1000-year Reich to its knees after just twelve years, we must nevertheless wonder just how up its own collective ass German Democracy must have been in order to get such a slab of Primal Upchuck elected in the first place. Even in death, however, Hitler still assumed a genuinely religious significance to his fanatical supporters, who spirited away his corpse even as the Soviets pounded at his door.