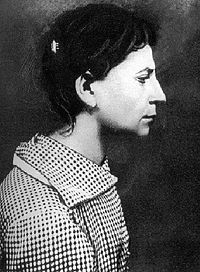 On 30th August 1918, as Vladimir Lenin left a factory where he’d just delivered a speech to workers, a female revolutionary by the name of Fanya Kaplan – disillusioned by the manner in which Lenin had assumed dictatorial powers and suppressed all political opponents – fired three bullets into the Bolshevik leader, wounding him in the shoulder and jaw, but failing to kill him. However, this attack ­– following just one week after the murder of the Bolsheviks’ Petrograd security boss Moisei Uritsky – caused such alarm and panic in the minds of Russia’s Revolutionary leaders that the seriously wounded Lenin received a telegram from Josef Stalin advocating “an open and systematic mass terror” against those responsible. Thus, the twin attacks on Lenin and Uritsky finally gave the Bolsheviks the excuse they’d long been seeking in order to consolidate Total Power by eliminating all opposition, even their former comrades, the Socialist Revolutionaries. And when an official decree for “Red Terror” was announced on the 1st September 1918, it read:

We will turn our hearts into steel, which we will temper in the fire of suffering and the blood of fighters for freedom. We will make our hearts cruel, hard, and immovable, so that no mercy will enter them, and so that they will not quiver at the sight of a sea of enemy blood. We will let loose the floodgates of that sea […] For the blood of Lenin and Uritsky, Zinoviev and Volodarski, let there be floods of the blood of the bourgeois – more blood, as much as possible.

Reprisals for ‘the blood of Uritsky’ commenced immediately in Petrograd, where over 500 Socialist Revolutionaries were shot without trial for their parts in the aborted third Russian Revolution, whilst elsewhere in Russia tens of thousands of political opponents and class enemies – without regard to individual guilt – would be summarily executed in the coming months, as the Red Terror expanded and unleashed the Russian Civil War.

As for Lenin’s would-be assassin, the twenty-eight-year-old Fanya Kaplan was immediately taken into custody, where – despite enduring the brutal interrogation methods of the Cheka – limited herself to this following statement:

My name is Fanya Kaplan. Today I shot at Lenin. I did it on my own. I will not say from whom I obtained my revolver. I will give no details. I had resolved to kill Lenin long ago. I consider him a traitor to the Revolution. I was exiled to Akatui for participating in an assassination attempt against a Tsarist official in Kiev. I spent eleven years at hard labour. After the Revolution I was freed. I favoured the Constituent Assembly and am still for it.

After four days of torture, Kaplan steadfastly refused to implicate other political opponents of Lenin. She was executed by firing squad on 3rd September 1918.