30th January 1649 the Execution of Charles I 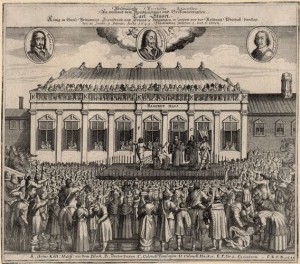 Off with his head

Today we commemorate the execution of King Charles I of England, executed on the orders of Oliver Cromwell after a trial by the Rump Parliament found the king guilty of being ‘a tyrant, traitor and murderer.’ It is not the place of this On This Deity entry to relate the details of this World Famous event, rather it is an opportunity to make note that the so-called ‘English Civil War’ of 1649-60 was more truthfully ‘The English Revolution’, as the Marxist author Christopher Hill has long maintained, being the direct precursor to both the French and Russian Revolutions. That the English killed their king well over one hundred years before the French Revolutionaries did the same is a fact often overlooked because our Commonwealth failed after only twelve years and the English monarchy returned in 1660. The regicide of Charles I having taken place so much earlier than other European regicides, however, scared future English parliaments into passing just enough reforms to appease subsequent generations, thus averting any real justification for total revolution.