30th November 1718 the Death of Charles XII of Sweden 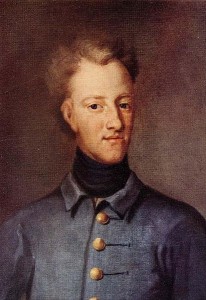 “Perhaps the most extraordinary man that ever appeared in the world” – Voltaire, 1731

We today commemorate – with wonder, awe and several mega-caveats – the brief bizarre life and equally bizarre death, of Sweden’s controversial King Charles XII, who met death on this day in 1718, during his second invasion of Norway.  That Charles’ skull was so precisely excavated by the 2” diameter grapeshot bullet that passed clean through it has only added to the legend of this remarkable human being whom certain future Swedish monarchs disinterred out of morbid curiosity and whom Voltaire described in his 1731 biography as having been: “Perhaps the most extraordinary man that ever appeared in the world.” Consider also Charles’s teetotalism and celibacy (‘I am married to the Swedish army’), and to this radical admixture blend in also certain tales of Charles’s magical intrigues with his even more esteemed subject Emanuel Swedenborg; it soon becomes clear why the cult of Charles XII, from the very beginning, attracted the attention of every radical element: from poets and musicians, to warriors, mercenaries and pure adventurers. Indeed, Charles has been one of my greatest heroes since that 1973 day in GCE European History when he first assaulted my consciousness as the 15-year-old king who overturned centuries of Swedish monarchical prevaricating by actually DOING something! Newly crowned but menaced by opportunist states such as Saxony, Denmark, Norway and Russia – each one waiting vulture-like, and each determined to use the inexperience of this teenage king as their chance to wrestle land away from the Swedish Empire – instead this snotty kid launched successful pre-emptive attacks on each of the aforementioned countries, concluding with his heroic victory of November 1700, in a blizzard during the Battle of Narva, in which Charles lost only 667 men whilst Peter the Great’s armies suffered almost 17,000 Russian dead.

Had Charles’s adventures concluded right there, his high place in Swedish history would have been assured. Unfortunately, however, Charles’s subsequent behaviour in the European military arena was mostly heroic folly and arguably went so far as to lose Sweden its empire. Not unexpectedly his disastrous invasion of Russia – like those of Napoleon and Hitler in future centuries – came to a grinding halt in 1709, on the road to Moscow, where Charles’s Swedish armies froze to death or starved due to the relentless thoroughness of Peter the Great’s scorched earth policies, whilst their king went into exile in the Ottoman Empire, where he schemed so openly that the Sultan placed him under house-arrest in Constantinople. But the Swedish people treated Charles’ escape and subsequent horsebacked flight home – some said in just 15 days – as an omen, and a medal was struck depicting the longhaired king astride his galloping horse. Unfortunately, Charles became obsessed with regaining Sweden’s lost prestige and it was during the second of his invasions of Norway, in 1718, that the king – just thirty-six years old – received his fatal head wound.

Charles XII will always remain a problematic hero because he was a punk not a role model, inspirational but not someone in whose steps we should wish to tread.  Instead he was a boundary-beater, i.e.: one who defines the edge of society’s behaviour. And in his ferocity, so this young king awoke northern Europe from its torpor. Hunter S. Thompson once noted that the only people who knew where the edge was were those who’d gone over it. I’d just like to add to that remark that society takes a dim collective view of such ‘singular’ human beings-at-the-edge as Charles XII, as I discovered to my cost back at school, when I defied the wishes of my history teacher Gwyneth Brown, who – sensing that my devotion to this Scandinavian lunatic would result in a hopelessly curriculum-unfriendly essay – forbade me to write anything about Charles in my A-level paper. I wrote the essay, I failed the exam.