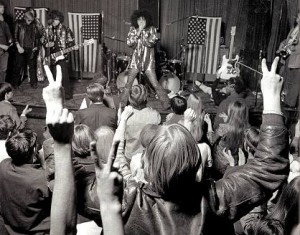 On 30th October 1968, the revolutionary Detroit commune Trans-Love Energies proclaimed a new era, ringing in the dawn of their Zenta new age at the Grande Ballroom, wherein the MC5 – the commune’s house band – pummelled over two thousand rabid rock’n’roll fans with sonic weaponry. Such a brazen declaration of intent – a calendar separate from the rest of society! – heralded one of the most incendiary events in rock’n’roll history. MC5 manager John Sinclair clarified his commune’s lofty aims for the Zenta Age: “The duty of the revolutionary is to make the revolution. The duty of the musician is to make the music. But there is an equation that must not be missed: MUSIC IS REVOLUTION.” For the MC5, the responsibility as vanguards of the revolution was all the more intensified by a huge added pressure. For this date would also see the live recording of their debut album, the soon-to-be legendary Kick Out the Jams.

After the chaos of the previous year’s events, it’s difficult to imagine the kind of mental states pervading the Trans-Love members by the time October 30th came around. Having already, during the 1967 Detroit Race Riots, survived the tanks of National Guardsmen who’d delighted in aiming their cannons at the Trans-Love Energies house, the two months prior to this Zenta New Year bash had been times of permanent confrontation with the authorities. It had been as revolutionaries that John Sinclair had accepted the MC5’s invitation to play in Chicago, during August 1968, at the Yippies’ “Festival of Life’. For the festival had been craftily organised to coincide with the mass protests planned for the 1968 Democratic National Convention. Every politicised musician and band in the country had been also been invited to perform, but only the MC5 showed up.

John Sinclair now found himself and his band caught at the epicentre of yet another riot, and the violent actions of the Chicago police escalated the incident into what was to become one of the ‘60s most notorious confrontations between demonstrators and authorities. The paranoid Sinclair now relocated the entire commune to Ann Arbor, forty long miles from the chronic persecution of the Detroit authorities. Here, as the MC5 worked up a new and confrontational act, Sinclair mused upon the events in Chicago and concluded that the counterculture, in order to defend itself, must mobilise with urgency. Furthermore, a youth-led political wing must be formed for what he called ‘a total assault on the culture’.

However, while the Trans-Love committee was still in session, Sinclair’s daily financial problems eased considerably when Jac Holzman’s Elektra Records offered him $25,000 to sign the MC5. And when Holzman agreed with Sinclair’s assertion that the MC5 would be best represented on their debut LP by capturing the band in concert, the imminent Zenta New Year was chosen as a serendipitous recording date. Bassist Michael Davis later called 30th October 1968 “the single scariest night of my life. So much was riding on that chance.” But take their chance they did, bringing forth one of the greatest rock’n’roll LPs of all time. And just two days later, John Sinclair – responding to the Black Panthers’ call for white support – unveiled his own White Panthers. Unfortunately, his long-term revolutionary aims were ridiculed by the press due to Sinclair’s shock tactics, declaring that revolution could be implemented through such practises as hedonism, rock’n’roll and fucking in the street.

But throughout the USA, the revolution was by now in fast decline. Manson. Altamont. Nevertheless, those revolutionary times brought forth the highest art, literature and music that – a half century later– still boggles the mind. But was Kick Out the Jams’ greatness due to all those New Year celebrations? Could such riches have been brought forth without all the planning and Utopian dreaming? For this writer, what seals the enormity of Kick Out The Jams’ achievement is the extraordinary spoken introduction by the band’s ‘spiritual adviser’ Brother J. C. Crawford:

“Brothers and Sisters, I wanna see a sea of hands out there. Let me see a sea of hands. I want everybody to kick up some noise. I wanna hear some revolution out there, brothers. I wanna hear a little revolution. Brothers and sisters, the time has come for each and every one of you to decide whether you are gonna be the problem, or whether you are gonna be the solution. You must choose, brothers, you must choose.”

These crazy, portentous, beautiful words will never fail to stir. So, to all of you Motherfuckers, Happy New Year!