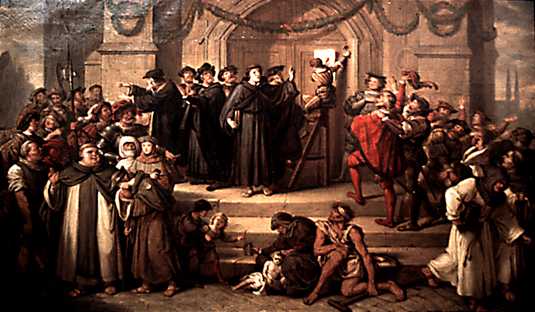 Despite the best efforts of fundamentalists of all kinds to have it otherwise, most of us are products of a generally secular society. This makes it almost impossible for us to conceive of a time when every expression of thought, philosophic, political or cultural, was expressed within the terms of reference of religion. But making that mental leap is precisely what we have to do in order to appreciate quite how revolutionary it was when an unknown German clergyman posted up on a church door his list of grievances against the Catholic Church in 1517. In so doing Martin Luther started a chain of events that would bring the Middle Ages to an end. In truth his was neither the first, nor the most radical, challenge to church authority, but it came at a time of political and social upheaval that gave Luther immense historical significance.

In the Middle Ages, the Catholic Church was the multifunctional organisation at the heart of every aspect of society. Quite apart from being one of the most powerful landowners in Europe, it held the virtual monopoly on knowledge, education and culture, and acted as the arbiter of morality and legitimacy. Luther’s challenge to priestly authority broke this monopoly at a time when Medieval society was starting to fracture politically, socially and economically. For Christians this marks the birth of the Protestant Reformation, and for historians it marks the beginning of Modern Europe.

From a 21st century perspective this upheaval starts with a seemingly technical and narrow argument over the corrupt sale of ‘indulgences’. Indulgences were remissions from God’s punishment issued by the Church in return for charitable works. In reality, in a church riddled with corruption and greed this meant that salvation could be bought by those who had the money to do so. In 1517 Luther, a German friar and scholar published his grievances against these abuses. It set him on a trajectory that would call into question the basis of church authority and of salvation itself. As a result within three years he would be excommunicated by the pope, and a proclaimed an outlaw by the Holy Roman Emperor. Luther might have disappeared from history, like many other previous religious dissidents, had he not had the protection of the Elector of Saxony who had his own grievances with the Holy Roman Empire.

It was whilst under this protection that Luther developed an ideology that would become recognisable as Protestantism. He developed a rationale that every individual was responsible for their own salvation based on a personal relationship with God – what Christians would call ‘faith’ – and not on adherence to a set of practises and observances ordered by a church hierarchy. For Protestants, the source of religious authority did not lie with a church hierarchy but with scripture – which it was both the right and duty of each individual to study in their own language. It was an ideology that was deeply attracted to any group that found itself in conflict with the Medieval establishment and the status quo. And in this respect there was not one but several Reformations.

Within the ruling classes there were those – like the Elector of Saxony – who in their jockeying for power adopted Protestantism as an act of realpolitik to justify wars against their neighbours. For the middle class, the craftsmen and merchants, previously on the margins of medieval society but becoming increasingly powerful, Protestantism promised a very attractive elevation of the free individual. Amongst the peasant masses, Protestantism provided a liberating focus of protest against centuries of Church repression and corruption. For two centuries these peasant masses had found an ideological expression of their grievances in radical religious movements as diverse as the Lollards in England and the Hussites in Central Europe.

In the 1520s a series of peasant revolts again expressed the ideas of Protestantism. The logic of Protestantism suggested a radically different form of church – a free assembly of like-minded individuals. However the implication of removing a church hierarchy was that of also removing a social hierarchy. In 1524 the German peasants expressed this in the Memmingen Charter – an anti-feudal manifesto that called for an end to serfdom and common ownership of land. Munster where the city was under the leadership of radical Protestants a kind of proto-socialist municipality was established, and ruthlessly suppressed by church and spiritual authorities, as were peasant revolts throughout Europe.

However, this kind of radicalism was not at all Luther’s vision of Reformation. Distancing himself from radical groups such as the Anabaptists, Luther made it very clear on which side he stood, declaring ‘better the death of all peasants than of princes and magistrates’. Until his death, Luther lived under the protection of the Elector of Saxony, developing his theology and re-organising the church in Saxony. This new church represented Luther’s compromise between his theology and his distrust of the masses and their radicalism. The result was what came to be known as ‘Lutheranism’ – a protestant theology welded to a reformed church hierarchy. This was very much ‘Reformation from above’.

In many parts of Northern Europe, particularly where the emerging middle classes were strongest, an alliance developed between them and some disaffected elements of the old nobility. They embraced this new form of religion, and derived their power and prosperity not from land ownership but from trade and commerce. This signalled a break with the Middle Ages and heralded the start of a new era, now recognisable as the first stages of modern Capitalism. Sociologist Max Weber in The Protestant Ethic and The Spirit of Capitalism saw an inextricable link between the two.

Luther is not necessarily a character that it is easy to like. Added to his distrust of the masses, he has also been credited as developing a particular German strand of anti-Semitism. However if for nothing else, he deserves to be remembered for his courage in standing up for the primacy of the individual conscience in defiance of seemingly unassailable authority: “I am more afraid of my own heart than of the pope and all his cardinals. I have within me the great pope, Self.”