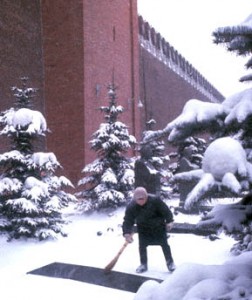 Shivering with the proles outside the walls of the Kremlin: J Stalin

Fifty-six years ago today, the Soviet Union’s policy of de-Stalinisation reached its peak when the tyrant’s body was removed from Lenin’s tomb in Red Square and reburied about 300 feet from that mausoleum, among minor leaders of the Revolution. A few weeks later, the grave was – with neither fanfare nor media invitation – decorated with a plain dark granite stone engraved simply: J. V. STALIN 1879-1953. The new Soviet leader Nikita Khrushchëv had inaugurated his de-Stalinisation policy half a decade previously with the incendiary 1956 speech, “On the Personality Cult and its Consequences”, which the Soviet leader had on February 25th delivered to a closed session of the 20th Congress of the Communist Party. At that time, the very idea of criticising Stalin, who had died only three years previously in 1953, was a shocking concept. But by the early ‘60s, de-Stalinisation was at its peak as evidenced by the removal of his embalmed corpse from Red Square. And on November 11th, the Hero City of Stalingrad was renamed Volgograd, a gigantic cultural cleansing for sure, though small beer to the parents, relatives and lovers of the twenty million Russian heroes that Stalin – with typically Custeristic flair – had flung into the inferno of the Great Patriotic War, the tyrant determined not to lose caste in the face of the Nazi onslaught.

This entry was posted in Curiosities, Tyrants. Bookmark the permalink.