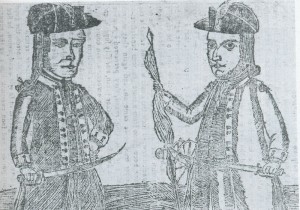 Today we consider Shays’ Rebellion – otherwise known as “the American Revolution’s Final Battle” – which very nearly led to America’s first civil war. This major grassroots uprising raged for six months and shared much in common with the ideologies that most of the armed insurgents had risked their lives for just four years prior against the British. But now, in a milieu of post-war economic depression, the ruling class of this embryonic nation imposed upon its beleaguered citizens a similarly onerous taxation to that which the Colonists had revolted against. At this stage, the thirteen states of America were anything but “united”. Independent of one another, each with their own governments and laws, they were loosely bound only by the Articles of Confederation. Shays’ Rebellion would expose the weaknesses of America’s congressional power under this system and have a profound impact on a move towards Federalisation and what was to become the U.S. Constitution, as the Founding Fathers responded not to a plea for democracy, liberty and equality – but rather to protect the rights and property of the elite, and ensure a standing army would henceforth be available to quash any future insurrections.

In the economic turmoil that followed independence, tens of thousands of smallholders risked losing their farms through mortgage foreclosures. By 1786, social tensions in the western counties of Massachusetts heightened as farmers’ debts piled up. Many had their land confiscated and sold to speculators way below market value; some were even thrown into debtor’s prison where they endured brutally inhumane conditions. The farmers petitioned, held town meetings, called to reform the state constitution, agitated for paper money and picketed outside courthouses – all the same tactics that had so successfully been deployed in the build-up to the Revolutionary War, but were now to no avail. The protests escalated to open insurrection when Daniel Shays – a Revolutionary War veteran who’d fought with bravery and distinction at the battles of Lexington, Saratoga and Bunker Hill – took command of the disgruntled farmers. Under his leadership, a group of disgruntled “Shaysites” rebels armed themselves with muskets, swords and pitchforks and began closing down the debtors’ courts. Without issued writs, property could no longer be seized.

The ruling class was irate. They responded by drawing up a Riot Act and suspended habeas corpus in order to keep people in jail without trial. Samuel Adams – architect of the Boston Tea Party and verily Father of the Revolution – even urged death sentences for the leading Shaysites. With the federal government financially and politically powerless to intervene, the wealthy merchants of Boston paid out of their own pockets to raise a private militia. Anticipating John Brown, Shays’ response was to raid the state armory in Springfield, march on Boston and burn it to the ground. On 25th January 1787, Daniel Shays and 1500 of his men trooped in heavy snow into Springfield headed for the arsenal. But unbeknownst to the rebels, a message to an ally had been intercepted, and the private militia defense was waiting for them. The Shaysites retreated to the western hills where, on the morning of February 3rd, the majority were captured and the uprising was at last quelled.

One hundred and fifty imprisoned rebels were sentenced to hang – all but three, including Daniel Shays, were eventually pardoned. But the fear of the revolutionary initiative of the masses and the threat to property and privilege had shaken the ruling class to its core. After Shays’ Rebellion, a majority of the confederated states were won over to the Federalists’ arguments for a stronger central government. In the wake of America’s first class uprising, the U.S. Constitution was passed by a minor fraction of the population – representing only elite males, with no voice for women, men without property, indentured servants or slaves.

And so the great tragedy of Shays’ Rebellion was that what began as a protest against centralised government ended up consolidating political power at federal level – creating a new oligarchy that would betray all of the American Revolution’s principles of equality.