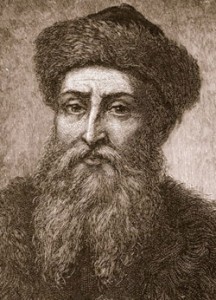 As befits such a momentous world-shifting event, On This Deity proudly presents two overviews to mark the occasion of the death of Johannes Gutenberg and the Printing Revolution he begat.

These days we are constantly told that the Internet is the most important invention in transforming the modern world. It has impacted all aspects of our lives – from the globalisation of brands through to the emergence of a new kind of radical activism – but it stands on the shoulders of the earlier printing revolution of the fifteenth century.  Today is the anniversary of the death in 1468 of Johannes Gutenberg, generally acknowledged as the father of European printing.

Printing in the form of woodcuts and copperplate engraving had been known in Europe for some time. But it was Gutenberg who developed a process using  ‘movable type’ – characters that could be assembled into a page layout and then disassembled for a new page. It was the same form of printing – known as letterpress – that remained the dominant process until the 1970s.

Gutenburg’s invention had far more than just technical significance. It is not an over-statement to say that without it there would not have been a Reformation, and without that, there would probably be no Western Capitalism as we know it. Nor would there have been its antithesis: radical dissent.

Within a few decades, printing overturned the thousand-year-old monopoly of the Catholic Church over the reproduction of the written word, and by implication, virtual control of the dissemination of knowledge. In an age where even many of the feudal ruling class were illiterate, the scriptoriums of the monasteries of Europe were the only custodians of written knowledge – and jealously guarded their control over the means of its reproduction. Their beautiful illuminated manuscripts represented hours and hours of work by teams of scribes and illustrators far beyond the means of any but the very wealthiest of patrons. Unsurprisingly the vast majority of texts they reproduced were Christian liturgies. It was only through contact with the Muslim scholars of Moorish Spain, and later from the crusades, that some of the secular texts of ancient Rome and Greece were preserved.

Johannes Gutenberg came from the small but growing middle class of medieval merchant-craftsmen. Biographical details are sketchy, but it is known that he was born in Mainz at the end of the fourteenth century. By the 1430s there are records of him as a goldsmith working in Strasbourg and enrolled in the civic militia – a bastion of the city’s affluent artisans.  As a goldsmith he would have acquired much of the technical knowledge required for type-founding and more importantly access to patrons who could finance his business ventures. Some of the few records that survive relate to a court case between Gutenberg and his patron over ownership of his first print shop that left him bankrupt.

The products of this print shop – in particular the ‘Gutenberg Bible’ – are generally considered amongst some of the most beautiful examples of printing ever produced. Although still expensive items way beyond the means of most of the middle class – only about 180 copies of the bible were produced and each cost the equivalent of three years’ wages for a clerk – they were nonetheless accessible to a much wider audience than the products of the monks’ scriptoriums.

But the real significance of Gutenberg’s workshop was what it subsequently made possible. No great radical himself, Gutenberg printed orthodox religious texts, Latin grammars and German poems – but without his invention it is hard to conceive of the Reformation, its challenge to Church authority and the radical movements of Early Modern Europe.

Common to all strands of Protestantism was the belief that each individual could interpret the ‘word of god’ by studying the bible themselves – independently of (Catholic) church hierarchy and authority. As a vital step towards this, John Wycliffe in England and John Huss in Bohemia had pioneered the publishing a study of religious scripture in their own indigenous languages  – and they and their followers had been savagely repressed by the Church authorities. A generation later, Martin Luther took the battle further as a prolific writer of reforming pamphlets.

The inextricable link between printing and Protestantism is evidenced by the fact that by 1525 half of the printed texts in Germany were authored by Luther. And at the same time that sixteenth century was dominated by religious conflicts – and the rise of a new middle class that threatened to overturn the old medieval order – so printing exploded across Europe. It is estimated that by1500, some 20 million volumes had been printed; by 1600, the total was 200 million.

As printing  – and its new middle class readership – grew, so too did a new consciousness. A consciousness based on the individual and his ability to forge his own way in the world. Critics and apologists of Capitalism alike – from Marx to Weber – have seen this ‘Protestant spirit’ as an essential ingredient for the new world order that marked the end of the Middle Ages.

But as the rallying call that ‘every man could be his own priest’ spread, printers and publishers also became the engine-rooms for radical religious ideas that were the first expressions of political concepts of individual freedom and egalitarianism. In England in the years preceding the Civil Wars of the 1640s, there was a golden age of political pamphleteering – and arguably the birth of the first newspapers. Without the printing press, the proto-radicalism of the Levellers and the Diggers would never have reached mass support. Even at a time when rates of literacy were alarmingly low, a small layer of radical artisans was able to have a disproportionate effect by reading aloud these news-sheets at open air meetings. Such meetings were frequent in the New Model Army and the streets of London – just as they would be centuries later in Russia in 1917.

It is ironic then that much as there is a link from Gutenberg’s first use of movable type to the modern Capitalist world, so too can we trace the letterpress to the birth of those radical movements that would overthrow the old world order. As Francis Bacon said in 1620, printing “changed the whole face and state of things throughout the world.”

Where would humanity be without the stone axe, the wheel, the plough, the compass and the steam engine? Likewise the printing press, whose inventor Johannes Gensfleisch zur Laden zum Gutenberg died on this day in 1468.

“Yes but” I hear you bookish pedants cry, “didn’t the Chinese T’ang Dynasty have a method of printing from carved wooden blocks?” Indeed they did, but its efficiency was limited. Wood blocks are fiddly to make, can only be used for one edition, will not take corrections, and degrade quickly.

Before Gutenberg books were an eye-wateringly expensive item. Each book took scribes months to produce. They hand-copied the text with quill pens using inks they made from gum, ox gall, soot and water onto sheets of parchment, an expensive product in its own right made usually from calf skin.

No wonder there were so few books and those that there were, were bibles; the only words worthy enough to commit to parchment. Most ordinary people had only ever seen one book – the bible in their parish church.

By the end of the 14th century there was a quiet unsung revolution going on; a water-powered method for making wood pulp-based paper had been developed. (Hence ‘paper mill’, since they were usually located on a river to power the process and provide the water.) Large quantities of uniform quality sheets were being produced cheaply.

Gutenberg was born sometime in the very late 1300s and worked in his native Mainz, Germany as a blacksmith and goldsmith. With his fine metalworking skills he developed his greatest gift to the world: moveable metal type. This he combined the traditional screw press (a Roman invention) to make durable, flexible and speedy printing equipment.

He cast tens of thousands of tiny individual metal letters in an alloy he devised of antimony, lead and tin. The letters could be ‘set’ to make words, sentences, pages, chapters, books, volumes! Initially fiddly to make and cast, yes, but they could be used again and again with no degradation. Letters were set by skilled compositors, inked and pressed onto paper. But wait: pre-existing inks were water-based and did not adhere to the type. No problem for our hero. Gutenberg set about inventing an oil-based ink, sticky like varnish, which would produce a crisp letterform on the paper.

All the elements were now in place to herald a revolution.

Gutenberg’s best known masterpiece is his 42 line bible, first sold at the 1455 Frankfurt Book Fair. Although it was an expensive two-volume affair, it caused a sensation. He wanted to keep his invention a secret, but the cat was out of the bag and by the end of the century more than 2,500 printing presses were hard at work throughout Europe. The public appetite for printed material proved, then as now, insatiable.

The first books were religious, but it didn’t take long for printers to branch out into classic literary texts, scholarly works, manuals, pattern books, story books. As more were published, books became cheaper, literacy increased and people sought entertainment. Just 23 years after Gutenberg’s bible, the first English printer, William Caxton, published Chaucer’s The Canterbury Tales. For the first time, English readers could read in their own language the exploits of characters they recognised from everyday life: the Miller, the Squire and the Wife of Bath.

Similarly, in Italy in 1472 Dante’s epic poem the Divine Comedy was published and helped to fix the Tuscan dialect as ‘Italian’, even though 14th century Dante considered himself a speaker of Latin. Books introduced the notion of spelling, helped to stabilise and standardise languages which in turn gave rise to a sense of nationalism.

Most importantly of all, the press had the power to spread ideas and information accurately. Scientific, cultural, technical, artistic, religious and political ideas could be shared and debated by many. The works of great philosophers such as Martin Luther and humanist Erasmus of Rotterdam could inform people, and for the first time almost gave them permission to think for themselves, armed with the information to make up their own minds. Governments and institutions couldn’t easily hide behind propaganda and self-serving lies anymore – although many still try.

As words became attributable authorship became important. Copyright laws were established to protect intellectual property. Reputations and fortunes were made. They still are.

Newssheets took a little longer to get going. In gossipy Venice a cheap newssheet costing one gazeta (hence Gazette) was circulated in the early 1500s, but it wasn’t until 1605 that what is widely regarded as the world’s first newspaper was published in Strasbourg with the least catchy title ever: Relation aller Fürnemmen und gedenckwürdigen Historien.

In 1900, author Mark Twain wrote: “The world concedes without hesitation or dispute that Gutenberg’s invention is incomparably the mightiest event that has ever happened … Whatever the world is, today, good and bad together, that is what Gutenberg’s invention has made it: for from that source it has all come … the evil wrought through his mighty invention is immeasurably outbalanced by the good it has brought …”