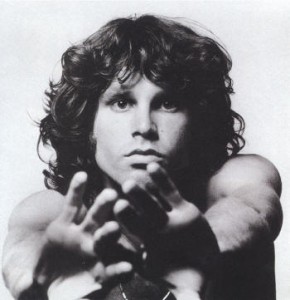 Today we honour that great poet and masterful singer, Jim Morrison, whose life was taken from him forty-six years ago today as he lay sleeping in his bath. He packed the life of an adventurous seventy-year-old into his twenty-seven short years, broke every rule whenever he could, both of The Man and of the hippie conventions of the day, incited crowd trouble at an arena scale whenever the Doors played live, yet still had time to present us with a sustained, well-honed and carefully conceived six albums between 1966 and 1971. He’s been gone so long now it’s almost impossible to imagine he was ever here. And when John Peel dropped the needle on “Riders on the Storm” soon after announcing Jim’s death, its cranky Frankie Lane guitar themes already sounded ten million years old to me. “When you accept authority, you become authority.” Jim’s greatest words ever. Pure genius. To Jim and his bath: the greatest there ever was.