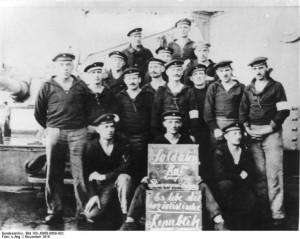 Following the stalemate that resulted from the Battle of Jutland in 1916, the German surface fleet was trapped in its home bases whilst only the U-boats continued a losing battle against allied shipping. By the autumn of 1918 the Imperial German war machine was at the point of collapse. In October a new chancellor was appointed and as a concession to the groundswell of anti-war opinion and radicalization on the home front, the socialist party – the SPD – entered the government. Privately the Kaiser’s advisers were urging him to negotiate a cease-fire.

Against this backcloth Admiral von Hipper, commander of the German fleet, ordered his ships into the English Channel to make one last stand. This futile gesture was derided as “The Glorious Death Ride Of The High Seas Fleet’ – and provided the catalyst for a naval mutiny which would force the end of the war and the start of the German Revolution.

It was not the first time that a naval mutiny would spark wider revolution: In Russia in 1905, and February and October 1917 it was the sailors who were the first to move.  And in 1923 at Kronstadt it would be the sailors’ revolt that marked another turning point in the Russian revolution.  There was even a series of mutinies in 1919 when  British sailors refused to take part in the military intervention against the Bolsheviks.

The radical nature of navies was no accident. The social organisation of a ship  mirrored that of industrial society in a way that armies did not. A ship’s crew had a high degree of mutual dependence and lived in close proximity, with a significant layer of specialists reflecting the skilled and independent–minded artisans who were often at the forefront of workers’ movements.  In contrast the armies of the time tended to mirror a more feudal structure – with a remote officer class and an intermediate layer of NCOs whose role was not generally that of technical specialists but brutal disciplinarians. By 1918 many of the sailors and dockyard workers in the North German ports had been won over to the support of the Independent Socialist Party – the USPD a more radical breakaway from the mainstream socialist whose leaders had largely supported the war. And it was in this context that when von Hipper issued his suicidal order on 24th October for the fleet to move to the channel, sailors in Wilhelmshaven refused to obey.

Using small torpedo gunboats with loyal crews, a mutiny was prevented and 47 ringleaders were imprisoned. In response in the nearby port of Kiel the sailors met in the local trade union offices and voted their support for the USPD’s demands of ‘Frieden und Brot’ or “Peace and Bread’ – an echo of the Bolsheviks rallying call, and the release of their imprisoned comrades. Under the leadership of two USPD members amongst their ranks, Karl Artelt and Lothar Popp, they made an unsuccessful march on the prison – shots were fired and the mutineers turned back with 36 casualties.

However by the next day there were 40,000 sailors and marines on the streets of Kiel and Wilhelmshaven – and the mutineers were in control of the city. Again echoing the Russian revolution, Soviet-style councils of soldiers, sailors and workers were formed and constituted a de-facto power in the city, and soon afterwards throughout Germany. By 7th November a workers’ council controlled Munich, a Bavarian Socialist Republic was declared and King Ludwig forced to flee.

This was the high-water mark of the German revolution: Under the pressure of civil war and facing the collapse of the old order, the Kaiser succumbed to advice and agreed to an armistice. Shortly afterwards he abdicated in favour of a new republic. Contrary to the later Nazi-myth of a ‘stab in the back’, after four years of slaughter the German sailors and workers had managed to end the war by taking matters into their own hands.

However, even at this moment of success, the seeds of the German revolution’s destruction were being sown. The leader of the Socialist Party, and member of the new government, Gustav Noske, was given a hero’s welcome when he arrived in Kiel. Although unknown to many who still looked to the Socialists as the natural leaders of the workers’ movement, he had received secret orders from the government to bring down the mutiny and the developing revolution.

For the next three months the forces of reaction, led incredibly by the official Socialist Party and aided by the proto-Nazi Freikorps waged a battle against the soldiers, sailors and workers’ councils. A new group on the Left emerged in the leadership of these councils; the Spartacist League of Rosa Luxemburg and Karl Liebknecht.  By January these leaders had been murdered by the Freikorps – paramilitary groups of nationalist ex-soldiers – and the revolutionary councils crushed across the country, with the last in Bavaria holding out until May.  A new coalition led by the socialists precariously held on to order, and established the fragile Weimar Republic that lasted only until descendants of the Freikorps seized power in 1933.