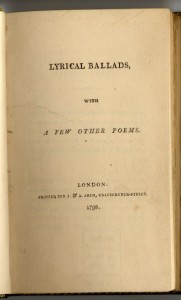 On this day in 1798, the English Romantic era was launched with the publication of Lyrical Ballads – the seminal collection of poems, mainly by William Wordsworth but with four (key) contributions from Samuel Taylor Coleridge. In Wordsworth’s “Preface” to the second edition (1800), he would famously declare that poetry should be “the spontaneous overflow of powerful feeling”. This was nothing less than a manifesto – reversing the ancient tradition of art as imitation of life, and locating the wellspring of inspiration within the poet. Lyrical Ballads would prove to be the harbinger of a revolutionary movement that forever changed the landscape of poetry and the role of the poet. This then is a day to celebrate, so let us briefly recall the events and aspirations that led to it.

It was on a memorable day in June 1797, only the second meeting between the two poets, that Wordsworth recited “The Ruined Cottage” to Coleridge – which Coleridge promptly declared “the finest poem in the English language” and inspired him to write that Wordsworth was “the greatest man I ever knew.” Wordsworth was just as drawn to Coleridge who, though slightly younger, possessed an unrivalled intellect and became Wordsworth’s mentor. In spite of whatever respective strengths or weaknesses that might have existed, there was no power struggle, jealousy or rivalry; each recognised in the other a spirit that was uncannily kindred to his own. The meeting was so life-changing that, within a month, Wordsworth and his sister Dorothy moved to Somerset from the Lake District to be closer to Coleridge, and the two men became inseparable companions – catapulting each other to groundbreaking heights. It was in this milieu of intellectual discussions, critiques of one another’s poetry and utopian dreams of making the world a better place through art that the idea of collaborating on a volume of poetry was born.

This first edition of Lyrical Ballads was published anonymously; the secret of authorship was so well kept that neither the authors’ names nor even the fact of dual authorship became generally known until announced in the “Preface” to the second edition in 1800. In the October 1798 “Advertisement”, the anonymous authors declared that the poems in the collection were a deliberate experiment in style and subject matter; Wordsworth would elaborate on this new theory of poetry in greater detail in the “Preface” to both the 1800 and 1802 editions.

Reviews were unfavourable (Coleridge’s “The Rime of the Ancient Mariner” was especially singled out for critical vitriol), proving yet again that only time is the true measure of artistic value and worth. But nevertheless the first edition of 500 copies sold out within two years, necessitating a second edition in 1800 and, with it, the “Preface” – a critical manifesto which did as much as the poems contained within to change our ideas about and expectations of poetry.

Still as potent today, here then for your edification are the words of Wordsworth:

“The principal object, then, which I proposed to myself in these Poems was to chuse incidents and situations from common life, and to relate or describe them, throughout, as far as was possible, in a selection of language really used by men; and, at the same time, to throw over them a certain colouring of imagination, whereby ordinary things should be presented to the mind in an unusual way; and, further, and above all, to make these incidents and situations interesting by tracing in them, truly though not ostentatiously, the primary laws of our nature: chiefly, as far as regards the manner in which we associate ideas in a state of excitement. Low and rustic life was generally chosen, because in that condition, the essential passions of the heart find a better soil in which they can attain their maturity, are less under restraint, and speak a plainer and more emphatic language; because in that condition of life our elementary feelings co-exist in a state of greater simplicity, and, consequently, may be more accurately contemplated, and more forcibly communicated; because the manners of rural life germinate from those elementary feelings; and, from the necessary character of rural occupations, are more easily comprehended, and are more durable; and lastly, because in that condition the passions of men are incorporated with the beautiful and permanent forms of nature.”

One Response to 4th October 1798 – the Publication of Lyrical Ballads