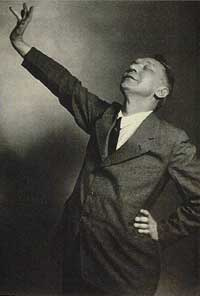 “If I cannot beat the system, I can die protesting.” – Vachel Lindsay

Today we lament the tragic suicide eighty-five years ago of Vachel Lindsay, the Visionary Illinois poet whose intriguingly itinerant ‘Johnny Appleseed’ lifestyle, visionary essays and paintings, slew of gritty epic, para-religious poems, and the extravagant and declamatory public manner in which he delivered those exultant works rocketed him in 1913 – naïve and unprepared – to unexpected heights of unwished for commercial success. Poems such as ‘General William Booth Ascends Into Heaven’, ‘Abraham Lincoln Walks At Midnight’ and ‘The Congo’ catapulted Vachel Lindsay into the kind of true fame that poets rarely achieve, feted wherever he went as that crazed orator with the preacherlike delivery. Moreover, it’s surely fair to argue that, had these early ‘hit’ poems not gained such favour with a populist audience and stifled Lindsay’s muse, we could now be staring at a far larger and greater canon of work. But when a talent as fiery and fundamentalist as Vachel Lindsay appears on the scene, we can only thank Lady Luck that any evidence whatsoever survives of his visit here. Lusty with righteousness and displaying a turn-of-phrase almost as divinely-informed as Oliver Cromwell himself, Lindsay famously declared: “Now let me burn out for God.”

The poet was born in 1879, in Springfield, Illinois, home of the great Abraham Lincoln himself, and therefore proof to Vachel that he had been set down upon hallowed, blessed ground. Throughout his childhood, Vachel wrote and mythologised his community, eventually even developing his own mythological worldview of the town in his illustrated The Golden Book of Springfield. Brimming over with ideas to improve the inner life of his friends and neighbours, Lindsay founded a short-lived magazine entitled ‘The New Localism, A Quarterly Journal of Aesthetic Appreciation of Life’ that itemized the improvements he believed his community should make. Like some Zapatista village leader concerned only with the landscape this side of the horizon, Lindsay declared his vision of Springfield thus: “Every little place will soon have its special calendar of outdoor festivals. The country High School, here and there, will produce not only its rhymer, but its poet, its orchestra or real composers, its own succession of sages, painters, Sibyls, its cornfield song, its festival insignia.” Recognising that it would inevitably fall to the poets and artists to draw up all of that ‘festival insignia’, Lindsay declared emphatically: “This U.S. needs to be taught beauty, and from no small rostrum… Let us be prophets of Beauty, in this nation, half begun, and still to grow. We see by comparison with Europe that nothing yet is fixed in America, all, all is yet possible for our land.”

But it was when Lindsay hit upon his idea to take on the role of the Wandering Poet that he finally defined his life’s task. And between 1906 and 1912, Vachel Lindsay tramped thousands of miles, selling his poetry book ‘Rhymes to be Traded For Bread’ or writing an original poem in situ in return for some domestic task such as laundry. Much of Lindsay’s best poetry was developed on the road, and he was shocked to discover – on returning in 1913 from his journey to New Mexico – that the publication of his ‘General William Booth Enters Into Heaven’ had brought him great fame. This fame was reinforced with notoriety the following year by the even greater success of his new and controversial poem ‘The Congo’.  At first, no task appeared too great for the newly-famous Vachel Lindsay to undertake. In 1915, he published a spectacular book The Art of the Moving Picture, a brilliant and percipient essay that reviewed several early movies, deduced where the greatest future film-making could take us all, and even anticipated the future rise of the director as the main author of the movie. But this marvellous book would remain a one-off work, as both the media and the public clamoured for more of Lindsay’s incredible lecture performances. And soon after the conclusion of World War One, the poet was invited to perform at Oxford University at the behest of the War Poet Robert Graves, himself determined to shake Oxford out of its torpor. Building his performance slowly and inexorably, Lindsay electrified the blasé Oxford audience and held them in the palm of his hands from the beginning. The overall effects of Lindsay’s performance almost caused a riot, and he was carried out triumphantly above the heads of the throng, thrilling Graves and causing future poet laureate John Masefield to write:

“It has been possible to say of every other American poet of this day that his kindred to some American or English poet; but no one knows the parentage of Lindsay. He sings America, but not in the White-man’s key; he turns sometime to gnomic and mystical chants, but they are aloft in a different space from that which Emerson’s muse visited.”

On returning to the USA, however, Lindsay soon became once more discouraged at his audience’s insistence that he perform mainly his old material. Lindsay’s earliest triumphs – particularly those vast Blakean-hearted poems such as ‘General William Booth Ascends Into Heaven’, ‘The Chinese Nightingale’ and ‘The Congo’ – had by now become tiresome albatrosses for the poet. Forced to make the bulk of his income speaking only his most famous works on well-paying Lecture Tours, Lindsay’s ‘hits’ prevented him from moving artistically forwards. According to his friend and biographer Edgar Lee Masters, Lindsay began to consider himself  ‘as a jazz poet, a kind of clown, whose vogue was passing and had even passed’. And with a young wife and family to support, Vachel Lindsay now went into a steep mental decline from which he never recovered. On 5 December 1931, the poet killed himself by drinking an early version of the drain cleaner Lysol.

For modern Americans, Vachel Lindsay is a thorny problem because he was an essential Doorway between the White and the Non-White worlds at the turn of the century, a kind of pre-jazz gleeman tenderizing whitey in preparation for the radical Negro-izing he’d undergo throughout the 20th century. In this way, Vachel Lindsay was a dispenser of the new Sacred, but spewed out in the underworld codes of the Profane. Always controversial, his poem ‘The Congo’ commences with the poet hidden from view as he observes Congolese tribesmen during their sacred rites. Self-conscious and Christian, at first he feels mirth at their behaviour, but compelled by their actions, keeps watching until:

“Then I had a vision,
I could not turn from their revel in derision.”

Here the Christian has been paganized. Or re-paganized. Which is it? Moreover, Vachel was America’s first white Wandering Poet to address consciously that thorny problem of what it is to bestride newly conquered lands as the representative of the Conqueror. Saxon poets did it in the British Isles. Japanese poets did so in China. But Vachel Lindsay’s canny decision to walk his own landscape sets him, and will continue to set him, apart from all other American artists. As Vachel himself declared:

5 Responses to 5th December 1931 – The Suicide of Vachel Lindsay