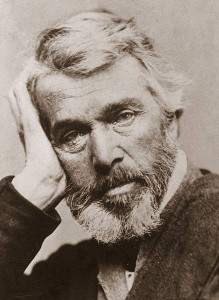 Today, we commemorate the indefatigable, controversial and visionary Scottish historian and essayist Thomas Carlyle, a literary giant of his time whose biography of Frederick the Great so a-flamed the German imagination that it was even studied as part of the curriculum in German military academies and who numbered among his closest friends both Ralph Waldo Emerson and John Stuart Mill. Indefatigable? Apparently so – when John Stuart Mill’s maid accidentally burned the entire unpublished manuscript of Carlyle’s The French Revolution: A History, the distraught Carlyle simply buckled down and re-wrote it from scratch. Visionary? In his bizarre and highly experimental book Sartor Resartus (‘The Tailor Re-tailored’), Carlyle (or rather his characters) argued that humanity’s history must be entirely re-written on account of the basic misconception that our clothes are ‘quite natural and spontaneous, like the leaves of trees, like the plumage of birds. In all speculations they have tacitly figured man as a Clothed Animal’. Not so, says Carlyle: ‘… he is by nature a Naked Animal; and only in certain circumstances … masks himself in clothes’. Controversial? From the evidence contained within Carlyle’s essays on Oliver Cromwell, the Prophet Mohammed and Frederick the Great, his almost childlike belief that the ‘great hero’ could always be called upon to lead his people to salvation ominously foreshadowed the events of the coming 20th century that facilitated the rise of Mussolini and Hitler. Nevertheless, Carlyle’s magnificent book On Heroes, Hero-Worship and the Heroic in History was the first in Christendom to address the Prophet Mohammed on his own terms, Carlyle declaring that the West’s then-current hypothesis that the Prophet ‘was a scheming Impostor … that his religion is a mere mass of quackery and fatuity, begins really to be now untenable to anyone.’

Unfortunately, however, Carlyle’s ideas especially in later life were often thorny – and never more so than in his infamous essay “Occasional Discourse on the Negro Question” which sparked a very public debate with John Stuart Mill. However, his most famous works are not only significant social commentaries but also remain stylistically revolutionary – rendering him one of the most important and artistic thinkers of his time.

One Response to 5th February 1881 – the Death of Thomas Carlyle