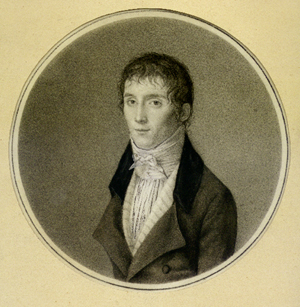 Look at the camera and say ‘cheese’ and ‘thank you’ to Joseph Nicéphore Niépce who died on this day in 1833, for it was Niépce who changed the way we view the world.

Born in France 1765 into a middle-class family Niépce was well-educated and comfortably off and from 1801 ran the family estate. He became a ‘gentleman of science’ doing experiments and inventing things. In 1807 he and his brother invented an early combustion engine he called the pyreolophore. When in 1813 the craze of lithography swept France he felt frustrated at not being able to make pictures because he couldn’t draw. Never one to say ‘jamais’, he decided to try to find a way of using light to make pictures for him.

His starting point would be the camera obscura, an optical device used by artists and scientists since ancient times. His challenge was to find a light-sensitive material and create a substrate for it which could be exposed to light and then fixed in some way. By 1816 he’d found a way of creating an image on paper sensitised with silver chloride, but he had trouble fixing the image, that is, stopping the process of light sensitivity, which leads to deterioration and fogging. He experimented with varnishes of bitumen and lavender oil on pewter or glass. He called the process heliography or sunwriting. He began collaborating with Louis Daguerre, who after Niépce’s death continued developing the technique and is today usually credited entirely with inventing photography. But it was Niépce who developed the principles of photography. His invention would change the world and how we see it.

By the middle of the 19th century sufficient improvements had been made to cameras and chemical processes to make photography popular and affordable, and for creative pioneers it offered new opportunities for truth-telling. Because the camera never lies, right? (Well, sometimes it does, but that’s another story.)

In 1862 Mathew Brady took his camera to the battlefields the American Civil War and in doing so became the father of photojournalism. His photos of mud and mangled corpses for the first time publicly revealed the realities of war. In 1878 Eadweard Muybridge used his cameras to investigate the patterns of footfall in The Horse in Motion.

By 1888, George Eastman’s Kodak company had become the Steve Jobs’ Apple of its day. But it was the launch of his box ‘Brownie’ camera in 1901 which finally meant that anyone, anywhere could take photos. We could now all share what we see. And how we have loved to ever since!

The invention of photography may have troubled mid-19th century jobbing portrait painters, but most artists were quick to exploit how different the world looks through a lens. French impressionist painter Edgar Degas loved what it offered and his compositions were heavily influenced by photographic cropping. A century and more later, there is still much to investigate about how we have come to rely on photography as a way of expressing ‘truth’. Artist David Hockney has spent his whole career experimenting with how images differ when we see the world through the lens or projected on a screen, and made us think again and think harder about the nature of truth.

Photographic images continue to influence our collective psyche. I don’t even have to show you Eddie Adams’ 1968 iconic image of the execution of a Viet Cong guerrilla for you to recoil in horror in your mind. The image is fixed in our DNA. Similarly, Stuart Franklin Magnum’s 1989 photography of a young man standing defiantly alone before a line of tanks in Tiananmen Square, Beijing says everything we need to know about that terrible moment in history. Finally, Bill Anders 1968 photograph ‘Earthrise’ taken from NASA’s Apollo 8 mission offered us a glimpse of our world as only a few will ever see it. It is surely the most beautiful photograph ever taken.

For helping us to see who and what we really are, for exposing truth, lies, frailties and horrors, and for revealing our glorious planet to us as together we hurtle through the cosmic darkroom of space, merci beaucoup Joseph Nicéphore Niépce.