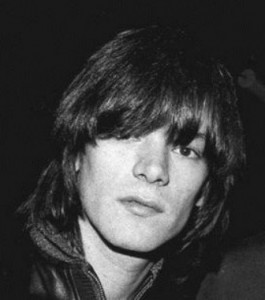 Today we pay tribute to the great rock’n’roll hero Dee Dee Ramone, who died on this day in 2002 aged fifty. What can we do but kneel at the grave of this hoodlum culture hero and give thanks to him for stealing rock’n’roll back from the Eagles, Fleetwood Mac and all the other ‘Life in the Fast Lane’ 70s Laurel Canyon clowns, doing so by barfing forth umpteen viciously succinct and totally left-field two-minute hate songs  – ‘53rd & 3rd’, ‘I Don’t Wanna Walk Around With You’, ‘Now I Wanna Sniff Some Glue’, ‘Pinhead’, ‘Gimme Gimme Gimme Shock Treatment’, ‘I Don’t Wanna Go Down to the Basement’ – all chock full of such excruciating stories and subject matter that the press could only respond as though Dee Dee’s band the Ramones were living cartoons. But in truth, most of Dee Dee’s crazy songs were in some way autobiographical; he did sell his teenage ass for drugs on the corner of New York’s 53rd and 3rd; the Ramones’ fixation with Nazi spies, shocktroopers and Cold War Russians emanated from Dee Dee’s early life as a US army brat in W. Germany; and whilst he claimed to have given up sniffing glue by the time he was fourteen, Dee Dee’s lament to his own heroin addiction (‘Chinese Rocks’) resuscitated the career of ex-New York Doll Johnny Thunders after having been rejected by the rest of the Ramones as being too controversial. Yes, so autobiographical was the extraordinary bozo subject matter in Dee Dee’s Ramones songs that when he left the band in the late 80s, his excuse for pursuing a new career as the rapper Dee Dee King was that the move finally gave him a chance to write ‘less personally’. For Dee Dee Ramone was the living embodiment of rock’n’roll, an igneus fatuus or ‘foolish fire’ who burnt with such brief but all-devouring intensity that it’s nowadays difficult to imagine music before the Ramones. But on stage in spring 1977, there was nothing at all humorous about these four black-jacketed commandos whose musical machine owed more to the US military than to a rock’n’roll outfit. And it was to their ‘1-2-3-4!’-spewing corporal Dee Dee Ramone that the other three ‘brudders’ addressed their gaze throughout that evening’s programme.

What went on in Dee Dee’s head must have been a truly righteous chaos. How he sustained it with all that madness and rage is astounding to me, especially beset by all the human flotsam and jetsam that the Ramones inevitably attracted. But Dee Dee was the Gnostic hero who brought us the greatest opening lyric ever, that of the Ramones’ ‘Rockaway Beach’:

“Chewing out a rhythm on my bubblegum.”

Could anything better represent the self-reliance of rock’n’roll’s mighty Inner Soundtrack than those magnificent words? Fuck everything and everybody else because I’m here in my cranium with me me me. But then, Dee Dee Ramone was a surefire and certified rock’n’roll genius; even being sussed enough to conclude his own autobiography Lobotomy with these extraordinary words:

“The breaking of rock’n’roll traditions. And not thinking that you had to be it or work for it. You just had to shout and demand it. And it was great. Because it gave everybody a chance to say something. That’s revolution.”