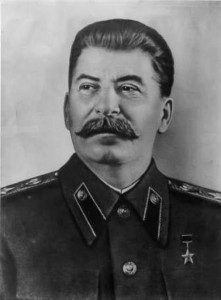 “Death is the solution to all problems. No man – no problem.” – J. Stalin

On this day in 1953, the people of the Soviet Union were finally shown cosmic mercy for their long sufferance, freedom at last from their quarter-century endurance test at the hands of a peripheral mad man. Peripheral? J. Stalin hailed from Georgia, about the equivalent of a Hebridean Gaelic-speaking Head of State at 10 Downing Street, or that mad Corsican – Napoleon – another peripheral who took over and ruined France. Or perhaps Adolf Hitler himself – yet another peripheral; not even German but a German wannabe peering piteously upon his homeland from the wrong side of the Danube. Learn from the misdeeds and misguided labours of these cruel, cruel peripherals. J. Stalin even spoke Georgian exclusively to his henchman Beria whilst in the Kremlin. That’s like having two Hebridean Gaelics jabbering away in 10 Downing Street. How many issues would be brewing in their minds? How much hatred of the intellectuals and the urbanites? No wonder it all went down when these world peripherals were having their day. 5’3” and a World Wannabe. For, through his infamous and none-more-cynical Nazi-Soviet pact, this diseased trollop J. Stalin so cozied up to Hitler, so brown-nosed that Brown Shirt, that even as the Luftwaffe stood poised and with the mobile German army already crossing the Soviet frontier, J. Stalin with his head in the sand refused to believe that his boyfriend was backing out. This vile, loathsome world dwarf, this race abuser, mass murderer, dilettante experimenter from the abject depths of fucking hell, this Godless sub-sub cunt of the All Time and rankest conspirator with none less than Adolf Hitler. He never ever learned. Hell, even after the war J. Stalin was known to repeat and loud enough for many to hear: “Ech, together with the Germans we would have been invincible.”