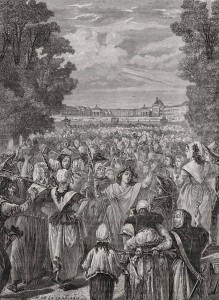 The Women’s March on Versailles

On this day in 1789, an angry mob of nearly 7,000 working women – armed with pitchforks, pikes and muskets – marched in the rain from Paris to Versailles in what was to be a pivotal event in the intensifying French Revolution. To the beat of a drum, the women chanted “Bread! Bread!” – for, despite the fertile French soil, the populace of Paris was starving while the remote Louis XVI and the much-hated Marie Antoinette continued to feast like proverbial kings and queens at their salubrious country gaffe. The Revolution had begun two months earlier, but neither the Storming of the Bastille, the “Great Fear”, the August Decrees or the “Declaration of the Rights of Man and the Citizen” had thus far managed to topple France’s seemingly intrinsic Ancien Régime. But the women who set out to Versailles to demand bread were about to change all that, and the very course of modern history.

By the time the women reached Versailles, their rage was focussed almost solely on Marie Antoinette – whose misattributed response to the plight of the breadless and starving peasants, “let them eat cake”, was nevertheless a wholly accurate indication of her cluelessness. 20,000 French National Guardsmen had been dispatched to protect the royal family, but the mob still managed to break into the palace to search for the Queen – who only narrowly escaped by fleeing to the King’s secure apartments through a secret passageway. Two of her bodyguards were not so lucky; their severed heads impaled on pikes served as a clear statement of the mob’s intent. The women then assembled in the palace courtyard and demanded to see the Queen. She eventually emerged, along with her two children whom she cunningly used as a human shield – but the crowd demanded the Queen face them alone. For ten excruciating minutes, Marie Antoinette stood on the balcony with her head bowed while the angry throng below screamed and pointed their muskets at her. Remarkably, they did not kill her. Instead, something far more unlikely happened: the masses recognised their own strength against the mighty monarchy. The women thenceforth demanded that King Louis XVI distribute the bread that the palace had hoarded, sanction the August Decrees and the Declaration of the Rights of Man and of the Citizen, and accompany them back to Paris to see for himself the plight of his subjects. The King had no choice but to agree to the terms. The next day, Louis and Marie Antoinette became prisoners of the Third Estate, or the “common people”, until their respective executions in 1791.

The Women’s March brought to an end the great monarchy of Versailles. But, of even greater significance, it forever transformed the role of women in revolution and what political gains they could expect for themselves. What immediately followed these events amounted to nothing less than a sub-revolution for the women of France. In the wake of their extraordinary success, they quickly began to organise – and just one month after the March on Versailles, they would present to the new National Assembly a groundbreaking demand for gender equality.

This entry was posted in Heroines, Revolution. Bookmark the permalink.