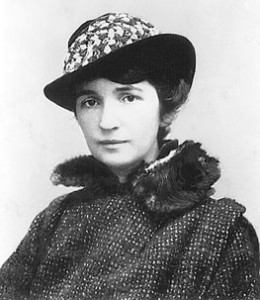 “When the history of our civilization is written,” wrote H. G. Wells, “it will be a biological history – and Margaret Sanger will be its heroine.” Hearing her tale for themselves, most modern women would find it difficult to disagree with Wells’ conclusion. She instigated the American Birth control movement, named her newspaper The Woman Rebel, and endured a 50-year crusade to convince the world that contraception was a basic human right. Throughout her half-century of struggle, Sanger endured constant legal harassment, prison, exile and the proclamations of political and religious leaders who denounced her as a ‘murderer’. Nevertheless, she relentlessly challenged the government, church, doctors, the press, public opinion, and even her fellow social reformists in her efforts to convince the world of the need for these most radical and liberating changes. So let us here celebrate the struggle of this World Heroine who died forty-eight years ago today at the age of 86.

Sanger’s battle began in earnest in 1912 whilst working as a maternity nurse in New York City’s impoverished Lower East Side. Having already observed her own mother’s slow and painful death at the age of forty-eight, her body ruined after eighteen pregnancies, Sanger witnessed multitudes of similarly worn-out women plunged into panic and despair at the thought of a fifth or sixth pregnancy. Many resorted to self-induced abortions, often leading to death; some even chose suicide. Sanger concluded that the only way to end such perpetual misery was through the introduction of birth control. But with no one from her socialist circle willing to help champion such a radical social problem, Sanger felt compelled to act alone.

First came her series of articles called “What Every Girl Should Know”, followed by the aforementioned newspaper The Woman Rebel, in which Sanger – determined to educate these desperate women – blatantly defied federal laws against supplying contraceptive information. In October 1916, Sanger and her sister opened America’s first birth control clinic in Brooklyn. But within ten days, the clinic was shut down and the sisters arrested and sentenced to thirty days in prison. Despite continuing legal harassment, however, Sanger indefatigably continued her campaign to educate women and lobby for legislative change. Forming the American Birth Control League in 1921, Sanger kept up the momentum until, at long last, public opinion began to turn in her favour. And by the 1940s, the birth control movement had won the acceptance of the medical profession. Legal change, however, was painfully slow to follow. And it was not until 1972 that all unmarried women in America were guaranteed the right to use contraceptives – a benchmark every bit as significant and momentous as the right to vote. For, as Margaret Sanger herself said, “No woman can call herself free until she can consciously choose whether she will or will not be a mother.”

8 Responses to 6th September 1966 – the Death of Margaret Sanger