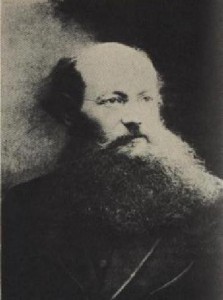 “All things for all men, since all men have need of them, since all men worked to produce them in the measure of their strength, and since it is not possible to evaluate everyone’s part in the production of the world’s wealth… All is for all!” – Peter Kropotkin

Today we salute one of the turn-of-the-century’s great revolutionary heroes, Peter Alexeyevich Kropotkin. Born into extraordinary wealth and nobility – a Russian prince, no less – Kropotkin surrendered his birthright and all that came with it for the life of a professional revolutionary, enduring persecution, long stints in prison and a half-century in exile. He was the most accessible and systematic exponent of anarchism of his time – who, by word and deed, commanded the admiration not only of his comrades but also the movement’s many opponents. Indeed, so selfless was his personal sacrifice, so utopian was his vision and so exemplary his life that he achieved the status of  secular saint: in his celebrated epistle De Profundis, Oscar Wilde was compelled to hail Kropotkin as “a man with a soul of that beautiful white Christ.”

A distinguished scholar, Kropotkin significantly advanced anarchist theory. Deploying his extensive knowledge of zoology, anthropology and history, he made a scientific case for the importance of solidarity and co-operation in the evolutionary process. In Mutual Aid, his social-scientific masterpiece, Kropotkin argued that Darwin’s theories had in fact been distorted; far from the ruthless competition that the likes of Huxley exhorted, ‘survival of the fittest’ was most successful when there was co-operation:

“In the animal world we have seen that the vast majority of species live in societies, and that they find in association the best arms for the struggle for life: understood, of course, in its wide Darwinian sense – not as a struggle for the sheer means of existence, but as a struggle against all natural conditions unfavourable to the species. The animal species, in which individual struggle has been reduced to its narrowest limits, and the practice of mutual aid has attained the greatest development, are invariably the most numerous, the most prosperous, and the most open to further progress. The mutual protection which is obtained in this case, the possibility of attaining old age and of accumulating experience, the higher intellectual development, and the further growth of sociable habits, secure the maintenance of the species, its extension, and its further progressive evolution. The unsociable species, on the contrary, are doomed to decay.”

While his theory of mutual aid was his principle philosophical offering, there is astonishing  prescience and prophecy throughout Kropotkin’s oeuvre. He was a pioneering ecological thinker: in Fields, Factories and Workshops, he foresaw the ruination of nature through the global market and called instead for local production and self-sufficiency. In The Conquest of Bread, he warned that capitalism could thrive only by maintaining poverty and scarcity for many whilst promoting privilege and wealth for few. He predicted with acute accuracy that state socialism would inevitably create a “new tyranny even more terrible than the old one.” In a scathing 1920 letter to Vladimir Lenin, Kropotkin cautioned: “the very word ‘socialism’ will become a curse.”

Nearly a century after his death, it is difficult to find fault with Kropotkin’s thinking – except, perhaps, his utopian overestimation of the capacity for harmonious co-operation of ordinary people. But for those who would reject the state, globalisation, false gods and subordination to authority, Kropotkin remains one of our most immense and valuable guides. In the spirit of anarchism, his essential works are available for free on the Internet: in addition to the aforementioned texts, vital are the stirring An Appeal to the Young and Memoirs of a Revolutionist – Kropotkin’s extraordinary account of an aristocrat turned hunted revolutionary: childhood days as a page to Emperor Alexander, topographical discoveries in Siberia, transformation in the Swiss Mountains amongst survivors of the Paris Commune, revolutionary activities with the Tchaikovsky Circle, arrest, incarceration and a sensational escape, exile in England and a triumphant return to post-Revolutionary Russia… such a life! And most remarkably, throughout it all, Kropotkin’s egolessness, optimism and integrity remained unwaveringly intact.

He was a great champion of humanity, and one of humanity’s greatest heroes.

3 Responses to 8th February 1921 – the Death of Peter Kropotkin