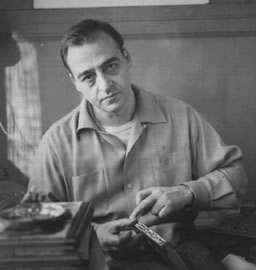 Henry Miller called him “the living symbol of protest.” In 1957, Kenneth Rexroth wrote that he was the only remaining poetic voice of America’s early twentieth-century revolutionary conscience. Today we are commemorating American poet and novelist, Kenneth Patchen – who died on this day following a heart attack aged 61.  The archetypal rebel poet, Patchen was an anarchist and lifelong pacifist whose early proletarian, apocalyptic and prophetic verse portrayed a hellish world inhabited by heartless capitalists. Chiefly remembered for his celebrated anti-war novel, The Journal of Albion Moonlight, Patchen was furthermore a bold, idealistic and visionary painter. Both the Surrealists and Beats would lay claim to him, but – despite his “elder statesman” status among Kerouac & Co. – throughout his long, prolific and highly experimental career, Patchen remained a lone wolf in the Blakean tradition, insisting: “The poet should resist all efforts to categorize him as a painted monkey on a stick, not for personal reasons alone, but because it does damage to poetry itself.” Patchen’s experimental and protean forms were also of the Blakean tradition, melding language with visual art for his renowned “picture poems” as well as his limited edition “painted books” – with each cover bearing an original painting by the author. He anticipated the Beats by fusing poetry with jazz, collaborating with the likes of John Cage and Charles Mingus. And so, to the bourgeoning San Francisco scene of the mid-1950s that congregated around Lawrence Ferlinghetti’s City Lights book store, Patchen represented the idealised model of contemporary Blakean poet-prophet – a visionary artist of originality, independence and uncompromising authenticity. He even had his own Catherine Blake. Financially strapped and immobilised for much of his adult life due to a permanent spinal injury, the often disheartened Patchen was buoyed up only by the devotion of his beloved wife and muse, Miriam. Theirs was one of the most moving and legendary marriages in American literature; all of his books bear the dedication “For Miriam.”

“He represents all that a poet should be, whether expressing himself in verse, in prose, in paint, or in action,” wrote Henry Miller of Patchen in his must-read essay, Man of Anger and Light. And indeed, throughout his 40-year career, Patchen strove to re-establish the profound role of the poet. So let us now recall Kenneth Patchen’s own artistic manifesto – which served as a Bible of Commitment to the Beats – where Art and Life are One:

“It is the artist’s duty to be alive
To drag people into glittering occupations
To assume the ecstasy in all conceivable attitudes
To blush perpetually in gaping innocence
To drift happily through the ruined race-intelligence
To burrow beneath the subconscious
To defend the unreal at the cost of his reason
To obey each outrageous impulse
To commit his company to all enchantments.”

2 Responses to 8th January 1972 – the Death of Kenneth Patchen