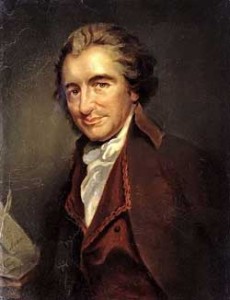 Erased from official history, the man who named "The United States of America"

Today we celebrate and give thanks to Thomas Paine who, in his lifetime, contributed profoundly and fundamentally to the American and French Revolutions. His words crystallised and brought to the forefront the struggles of Britain’s Industrial Revolution working class. His ideas permeated the Declaration of Independence. He coined “The United States of America”. One of the most remarkable political writers of the modern world and the greatest radical of a radical age, his achievements led the second US president, John Adams, to declare in 1805: “I know not whether any man in the world has had more influence on its inhabitants or affairs for the last thirty years than Tom Paine.” But by the time of Citizen Paine’s death on this day in 1809, so far had his star fallen that only six people attended the funeral of this one-time people’s hero.

So what happened? And why has one of the most important Founding Fathers of the United States been consigned to the margins of “official” history?

Born and raised in England, Paine emigrated to the Colonies in 1774 when he was thirty-seven. He immediately seized upon the New World’s revolutionary fervour, yet discovered a reluctance to fully withdraw from what was an intrinsic allegiance. So while even George Washington was still toasting his king, the little-educated Paine wrote and published Common Sense – a call to arms that ignited Americans and gave them the courage to be disloyal, to become revolutionaries, to be citizens rather than subjects.

Paine challenged the King’s authority and mocked the very concept of monarchy (“even brutes do not devour their young, nor savages make war upon their own families”). He blamed British rule for virtually all of the Colonies’ problems, and graphically outlined the imperialistic crimes. And it was Thomas Paine who declared that only through unification of the colonies could there be triumph over tyranny.

Common Sense was the first American national bestseller. Paine pioneered a new literary style of accessibility that appealed to everyone from plantation owner to farmer, and its widespread success would mark the turning point that finally ignited the long-smouldering Revolution.

After the war and a brief, unsuccessful stint in Congress, Paine returned to England where he wrote The Rights of Man – an Everyman’s guide to Enlightenment thinking in which universal and natural rights (for men) were no longer decided by privilege and the past. It would prove to be the Common Sense equivalent to the French Revolution. Paine was welcomed in France as a citizen and champion of the people, but his unlikely opposition to the execution of Louis XVI led to his arrest and death sentence.

Whilst incarcerated and not expecting to survive, Paine wrote the The Age of Reason – a scathing attack on Christianity and organised religion. After Robespierre’s downfall, Paine miraculously escaped death – but he would never in his lifetime escape the monumental consequences of his anti-religion treatise. He returned to the United States in 1802 to face ostracism from his pious and powerful former allies. Shunned, his last years of life were plagued by poverty and alcoholism. His obituary read: “He had lived long, did some good and much harm.” His role in the making of the United States was henceforth effectively erased.

Thomas Paine led with his pen, through his ability to bring forth ideas in a language people could understand. His meteoric rise to fame was followed by almost as dramatic a fall in popularity, but his impact is unquestionable. For his pivotal role in the American Revolution and “democratising democracy”, he deserves an assured and esteemed place in history.

Is it not therefore highly suspect that the man who wrote “these are the times that try men’s souls”, coined the phrase “United States of America” and drafted the Declaration of Independence has for the most part been relegated to ‘world’s forgotten boy’?