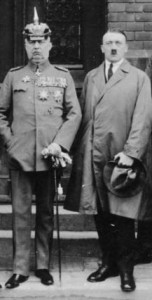 Ludendorff and Hitler at their trial

Ninety-four years ago today, Adolf Hitler – a full decade before actually seizing power – led his young Munich-based Nazi Party in an audacious yet disastrous attempt to force armed revolution upon chaotic post-WW1 Germany, when 600 Nazi stormtroopers gate-crashed a huge political rally at Munich’s Bürgerbraukeller and arrested members of the Bavarian government gathered there. Firing his pistol into the ceiling in order to be heard over the din, Hitler screamed: “Either the German Revolution begins tonight or we will all be dead at dawn!” That night, several Social Democrat councillors were kidnapped, the offices of the Social Democrat newspaper Münchener Post were destroyed and billposters were pasted up proclaiming Hitler as the new Reich’s Chancellor. But when the Nazis failed that night to seize control of radio communications and the politicians were accidentally freed in the chaos, Hitler proceeded to the next stage of the coup knowing full well that his plan could not succeed. And so at noon the following day, still hoping-against-hope to stir the public out of their apathy, Hitler gathered together a column of around 2,000 men for a symbolic march from the Bürgerbraukeller to the War Ministry. Joined by General Ludendorff himself – Germany’s greatest World War One hero and symbol of the Nationalist Right – Hitler was convinced that the police would hold their fire on seeing that so great a hero was involved. But when the column of marchers reached a large police cordon, shots were fired by persons unknown and a vicious 30-second gun battle broke out that left fourteen marchers and four policemen dead.

Had Adolf Hitler been a leader from the Far Left, he would most certainly have been executed for such extreme actions: causing the deaths of four policemen, the kidnapping of public servants, proclaiming a new Bavarian government, the destruction of the newspaper offices. Plans were afoot to send him back to Austria. Vienna wouldn’t take him. Moreover, Hitler had previously been banned from public speaking for two years on account of the incendiary nature of his speeches, and was still on probation for breaches of the peace from January 1922. But so accommodating of the Far Right were the anti-Prussian, anti-socialist Catholic lawmakers and law enforcers of Bavaria that the presiding Judge Neithardt at Hitler’s trial allowed him to speak for four hours, while a colleague was heard to remark: “What a tremendous chap, this Hitler!”

Hitler received only a five-year sentence. And while the popular press assumed with relief and satisfaction that this bloody Nazi PR disaster must signify the end of Bavaria’s tiresome Beerhall Agitator and his violent hordes of paramilitary reprobates, instead Hitler cannily used this enforced spell out of the public eye to create his vast manifesto Mein Kampf, dictating his ideas to the spellbound Rudolf Hess in the spacious surroundings of his Landsberg jail. And it was while in jail that Hitler’s cult began to grow. Just one month before the failed Putsch, Hitler had declared to a British journalist for the Daily Mail, on October 2nd 1923: “If a German Mussolini is given to Germany  … people would fall down on their knees and worship him more than Mussolini has ever been worshipped.” Fan mail poured in to Landsberg Jail and even his warders fawned over him. Hitler even gained considerable weight. And all the while in the cold civilian life outside, the vast hole in Germany’s Far Right Wing political scene created by Hitler’s enforced temporary absence only served to further increase his legend in the minds of other right wing leaders. And that five-year-sentence? He served less than half of it.

Regarding the strange and eerie rise of Adolf Hitler, the Beerhall Putsch is just one of many bizarre events in which the law was bypassed to ease Hitler’s safe passage up the next rung of the political ladder. In this way, Hitler was sugar-daddied into power by wealthy German intellectuals and politically-hungry noblemen, all charmed and fascinated by this gangster-styled outsider orator and/or desperate for the working class votes that a coalition with Hitler’s Nazis would guarantee; all of them convinced that Hitler the former corporal would – in Uber-class conscious Germany – forever be prepared to play the role of drummer boy. And all of these toffs too snooty to notice that their floppy-haired protégé had such a mind of his own that he’d long been playing them for fools. And it was in this misguided belief that Adolf Hitler could be controlled by the upper classes – for their own uses and gains – that Germany’s own highest military hero and ‘symbolic leader’ of the Nationalist Right General Ludendorf found himself walking alongside the former corporal on that fateful day eighty-nine years ago. However, within the decade, General Ludendorff would declare:

“I solemnly prophesy that this accursed man will cast our Reich into the abyss and bring our nation to inconceivable misery.”