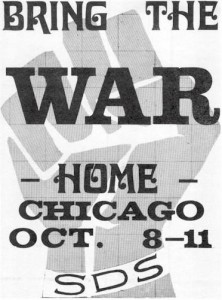 How can you do nothing? The Weathermen – still under the guise of the SDS – attempt to “Bring the War Home”

On this day in 1969, the Weathermen – the newly-formed militant faction of the Students for a Democratic Society (SDS) – attempted to “Bring the War Home” with a no-holds-barred direct action in Chicago,  surreptitiously billed “Days of Rage”. The intent was to cause chaos in the streets and jolt the public out of its complacency towards America’s imperialistic and murderous war in Vietnam. Following the great success of the Democratic National Convention protests in August 1968 and the collective outrage surrounding the subsequent and ongoing Chicago Conspiracy Trial, both the organisers and authorities expected it to be the largest protest of the decade. However, instead of “Bring the War Home” it was more a case of “Suppose They Gave a War and Nobody Came”. Tens of thousands had been predicted, but only a few hundred showed up. The Weathermen leaders had spectacularly misjudged the counterculture’s revolutionary fervour: while their former SDS comrades, some 60,000-strong, had been more than willing to carry placards and even risk arrest, most were inherent pacifists and very much not down with Che Guevara’s ‘foco theory’ of urban guerrilla warfare.

Despite the embarrassingly low turnout, the four days of planned actions went ahead – the first of which was little more than a rampage through Chicago’s affluent Gold Coast district as protesters randomly smashed store windows and destroyed cars. After less than half-an-hour, the three hundred or so demonstrators were outnumbered by 1,000 cops; in the resulting melee, six Weathermen were shot and 68 arrested. It was hardly the Che-inspired Hasta la Victoria Siempre that the young revolutionaries had envisioned. In fact, the Cubans sent word to the Weathermen that the action was a terrible mistake – a sentiment echoed by Fred Hampton, the dynamic young leader of the Chicago branch of the Black Panthers (who, less than two months later, would be violently killed by the police): “We believe that the Weathermen’s action is anachronistic, opportunistic, individualistic,” said Hampton.  “It’s chauvinistic, it’s Custeristic. And that’s the bad part about it. It’s Custeristic in that its leaders take their people into situations where the people can be massacred and they call it a revolution. It’s nothing but child’s play. It’s folly. We think these people may be sincere but they’re misguided.”

Hampton’s words were particularly cutting, as fundamental to the Weathermen’s ideology was solidarity with the Panthers. Their attempt to guilt the entire anti-war movement for not being revolutionary enough was an almighty failure, but the militant core clung to JFK’s notion that “those who make peaceful revolution impossible will make violent revolution inevitable.” The internal post-mortem following the Days of Rage saw the Weathermen completely revise their tactics. There would be one more very harsh lesson to learn, in which three of their own lost their lives, but by May 1970 they would change both their modus operandi and name to the Weather Underground. Henceforth, their targets would be covert and painstakingly planned to harm no one.