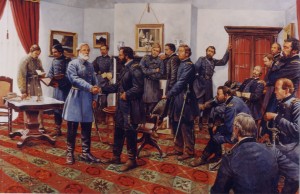 The Surrender. But not for long.

On this day in 1865, General Robert E. Lee surrendered the Confederate Army of Northern Virginia to the Union’s Lieutenant General Ulysses S. Grant. In the parlour of the home of Wilmer and Virginia McLean in the town of Appomattox Court House, Virginia, these two great adversaries – Lee in his finest gold sash and sword, Grant in muddied field uniform – exchanged pleasantries and reminiscences of the Mexican-American War before arriving at the business at hand. When the terms for surrender were finally presented, they were as generous as Lee could hope for: his men would not be imprisoned or prosecuted for treason, they would be allowed to take home their horses and mules to carry out the spring planting, and Grant even extended a supply of food rations for the starving Confederate army. A grateful Lee said such gestures would have a very happy effect among the defeated men and do much toward reconciling the country. As for Lee himself – this brilliant general who had consistently outsmarted the Union against seemingly insurmountable odds – he was told to get back on his horse and just “go home”. And so he did. And as he did, the Union army began cheering in celebration. But Grant ordered an immediate stop. “The Confederates were now our countrymen,” he said. “We did not want to exult over their downfall.”

Thus concluded the American Civil War: four brutal and bloody years, some 630,000 deaths and more than one million casualties – it remains the bleakest chapter in America’s history. But what had actually been the verdict at Appomattox? What had the Union won? What had the Confederacy lost? How could this Humpty Dumpty of a nation put itself back together again? Could there be genuine reconciliation? Lee’s surrender at Appomattox set the scene for America’s so-called Reconstruction Era, the immediate post-Civil War period that would attempt to address all of these massive questions, but would ultimately fail to resolve any of them.

Lee might have been grateful for such generous terms of surrender on that afternoon of 9th April 1865, but the real terms emerged with the 13th 14th and 15th amendments to the US Constitution, respectively abolishing slavery, guaranteeing equal protection, and granting voting rights regardless of “race, color, or previous condition of servitude.” For the White South, these amendments were akin to the Treaty of Versailles: a red rag to a bull. The North’s revolution of Reconstruction quickly resulted in the South’s counter-revolution of White Supremacy; and there could be no reconciliation for white supremacy and black equality. Between 1868 and 1871, the Ku Klux Klan and its many imitators emerged as semi-legitimate bodies hell-bent on taking back control of the political South, and – through the most widespread use of political violence in American history – re-establishing a social order based on racial subordination and labour control. Without a great leader to usher in a new era, the Northern Republicans gradually tired of and betrayed its post-war ideals, culminating in the disgraceful Compromise of 1877. And so it happened that just twelve years after Robert E. Lee’s surrender, blacks in the South were once again under the yoke of a white master through the Southern Democrats and Jim Crow laws.

As W.E.B. DuBois observed: “The slave went free; stood a brief moment in the sun; then moved back again toward slavery.”