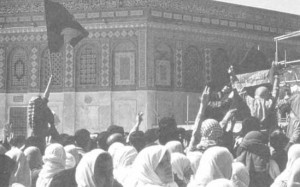 Today we mark the beginning of the first Palestinian Intifada in 1987. Various end dates are cited, usually falling between the Madrid Peace Conference of 1991 and the Mehola Junction bombing of 1993, but arguably the conditions and enmities created during those first years have characterised Israeli-Palestinian relationships ever since, however one chooses to draw the timeline.

The word “intifada” has a dual meaning, neither of which tally with the widespread misconception that it translates as “uprising” or “rebellion”. In fact it means either to “awaken suddenly”, or to “shake off a fever”. As such, it is noteworthy that the vast majority of the Palestinian activities in the first intifada were non-violent. Indeed, there is much evidence to suggest that the various Palestinian groups – usually described as terrorists in the media – who organised resistance during those first years of intifada went to great lengths to employ a strategy of non-violence. Large numbers of Palestinians took part in protest marches, general strikes and various acts of peaceful civil disobedience. Nonetheless – as is so often the case – the media became fixated on the riots and violent attacks. And for years, images of Palestinian youths throwing rocks at Israeli armoured vehicles became a regular sight on television screens across the globe.

The Israeli-Palestinian conflict is a difficult subject to tackle because it has so radically polarised opinion. Two rather simplistic narratives have emerged from this complex situation and a lot of people have flocked to one or the other, rather than deal with the ambiguities of reality. What’s most startling is the aggressive manner in which many people without a personal stake in the situation will defend one of these polarised positions. The pro-Israeli position sees Israel as a sovereign state under violent attack from Palestinian militants, and either implicitly or explicitly equates the Palestinian cause with terrorism. The pro-Palestinian position sees the state of Israel as acting tyrannically towards the Palestinians and the actions of the militant groups as regrettable, though ultimately justified.

Neither view captures the tragic reality of two groups of people trapped in a mutually destructive embrace.

The State of Israel came into being soon after the second world war. It’s an over-simplification to suggest that the creation of Israel was a direct result of the Nazi persecution of Jews, but the holocaust was clearly both a catalyst and one of several causes. Horrified by the concentration camps, the world quite rightly sought to offer some form of reparation to the Jewish people. The Zionists had been agitating for a Jewish homeland in Palestine for decades and the world powers felt that granting this wish would be an appropriate response to the horrors perpetrated by the Third Reich. Had the area been uninhabited, they would have been right.

Unfortunately though, it wasn’t. The rights of Palestinians to self-determination were completely ignored in the decision to create Israel. And while only extremists suggest that this decision should be reversed and Israel dissolved completely (an act that would provoke too much bloodshed to be considered a rational solution), it should always be remembered that a grave injustice was done to the Palestinian people when Israel was founded, and that injustice has never been adequately addressed by either Israel or the international community.

At the same time, it should also be borne in mind that the holocaust had left an indelible mark on the Jewish psyche. How could it not? James Joyce once said, “Nations have their ego, just like individuals”, and just like individuals they can suffer trauma and psychological damage. A psychoanalysis of the behaviour of the state of Israel points to a people suffering from the effects of Post Traumatic Stress.

While the simplistic pro-Israel position will justify their current behaviour as a purely rational response to being “surrounded by enemies”, it is nevertheless the case that PTS is liable to generate severe paranoia. Israel’s massive military, their obsession with security – to the point that it dominates Israeli politics almost to the exclusion of all else – even going so far as to build a wall around the entire nation… if we accept that nations can suffer collective psychological trauma, then these are precisely the kinds of behaviour we would expect to see from a people who had experienced the holocaust.

One does not blame a person suffering from Post Traumatic Stress for their paranoid behaviour. But nor should it be encouraged or sanctioned, and by doing just that the international community have helped create an intractable situation. The policies adopted by the modern state of Israel towards the Palestinians are neither just nor rational. The United Nations has declared the occupation of the West Bank to be illegal and while the pro-Israeli position can’t accept this fact, the Israelis are clearly acting in a tyrannical manner. They have completed the journey from oppressed to oppressor. And yet there is a real sense in which they cannot be blamed for this. “The fathers have eaten bitter fruit and the children’s teeth are set on edge”. The policies of Israel may be oppressive, irrational and ultimately self-destructive but they are also entirely to be expected given recent history.

From the Palestinian perspective, however, this is hardly a justification for the deep injustices they face as a people and a displaced nation. They can quite legitimately claim that Israel is illegally occupying their land and acting in the manner of a brutal dictatorship. That this behaviour is the result of historical trauma and the intervention of powerful states with their own agendas, does not – and should not – prevent the Palestinian people from seeking justice and autonomy.

Which brings us back to the first intifada. On December 6th 1987 an Israeli citizen was murdered by a Palestinian in the Gaza strip. Two days later an Israeli truck driver killed four Palestinians in what was seen as a deliberate reprisal. Such apparently minor incidents, when placed in the hothouse of paranoia and polarisation, can prove explosive. And so it was that on December 9th widespread protests and riots began. Over the course of the next few years more than 150 Israelis were killed by Palestinians. In the same period more than a thousand Palestinians died at Israeli hands, while almost as many were killed as collaborators by other Palestinians (mostly without credible evidence).

It’s a cycle of violence that still continues today, with little or no real progress having been made. The actions of both sides have roots that stretch back generations. The Israeli soldier manning a checkpoint in the Occupied Territories has been raised to believe that only through demonstrations of strength and power can the genocide of the jewish people be avoided. This does not legitimise their actions, but it does explain them. And it also explains why it is unreasonable to expect a solution to come from within mainstream Israeli culture.

The Palestinian militant, on the other hand, sees the occupation of their land and the oppression of their people. They see their family struggling to secure basic necessities such as food and water, and quite understandably views Israel as an enemy to be resisted and overthrown. While those of us who instinctively support the underdog may view their militancy as understandable – even legitimate – it is nonetheless irrational and self-destructive and those engaged in it are just as trapped by history as their Israeli counterparts.

For in a situation where one side enjoys overwhelming military supremacy but is suffering extreme paranoia, while the other is in a cage of poverty and oppression, all violence will simply feed the conflict. Indeed, even the threat of violence against a traumatised nation will trigger reprisals and a retreat deeper into paranoia.

The first intifada was the genesis both of Hamas and Islamic Jihad. It involved thousands of attacks on Israeli soldiers and civilians, along with the peaceful protests and acts of civil disobedience. Yet nobody can deny that, however justifiable it may have been from a moral standpoint, it succeeded only in worsening relations between the two peoples and provoking massive retaliation. The aims of the Palestinian intifada are to be lauded and supported – the “shaking off” of oppression and the formation of an autonomous nation. The actions of Israel on the other hand – while not to be justified – must always be viewed through the prism of their history.

Ultimately the solution to the Israel-Palestinian crisis will not come from either wall-building or intifada, for such strategies merely entrench the adversarial positions both sides have found themselves in. The solution requires patience, creativity and empathy, more than it requires guns, roadblocks and bomb vests. It requires an international community prepared to treat both sides as equals. To accept that neither side is in full control of their actions and thus must be guided, firmly but with compassion, towards a just solution.

Perhaps the most famous Zionist in history, Albert Einstein, wrote that “the attitude we adopt toward the Arab minority will provide the real test of our moral standards as a people”. Arguably Israel has so far failed that test. But on this anniversary, let us all look towards the day when that change … when both peoples escape the prisons of their history and find themselves inspired by the hopes of a peaceful future rather than the fear of a violent past.