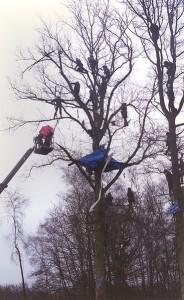 The Battle for the Trees at Tot Hill, Newbury

On 9th January 1996 the bulldozers and chainsaws moved in to clear the route of the Newbury bypass. This nine-mile stretch of Berkshire countryside had been under threat since a public inquiry in 1988 approved the building of a four-lane road.

With the rising environmental awareness of the late 80s and early 90s came a new commitment to direct action. Open cast mines, peat extraction works, golf courses and many other places were targeted by the new generation of Earth First!-style actions. But the movement really congregated around the issue of roads.

Treehouses were constructed with rope walkways between them so that it would be a difficult, lengthy and expensive job to remove them. It began four years earlier at Twyford Down and spread to numerous threatened woodlands, including Newbury.

Along the Newbury route were three Sites of Special Scientific Interest, ancient woodland, an Area of Outstanding Natural Beauty, rare wildlife in some of the cleanest rivers in the country, organic farmland, and a dozen archaeological sites from a nationally important stone age axe factory site to the two historic battlefields of the Civil War that lent their name to the road protest. Anything that made a piece of land special, precious, worth saving, it was there.

The idea that roads generate rather than solve traffic was long proven by studies. If there is a new road, people will use it. However, it was still a tad counterintuitive for simple-minded ministers, and the cloud of bullshit from construction firm lobbyists made it even harder to see clearly.

What Margaret Thatcher called ‘the great car culture’ was an assault not only on our land and lungs but on social justice. The out of town developments really were making motorway services into the new cities, and they excluded those who couldn’t afford the four-wheeled entry fee. A third of British citizens had no access to a car – the poorest third. Meanwhile, because poor children walked and played in the street they were far more likely to be run over than their rich counterparts.

Beyond this, it was about a clash of values. The profitable versus the sustainable, the greedy versus the stewardly, the acquisitive versus the humane. Some people came just to defend a favourite piece of woodland, but whatever brought people there it was soon apparent to all that the road was not a one off; nor was it about all roads; this was just one prong of an insane bloated vision that placed endless profit above all else. Visions and bonds forged at the road protests became the seeds and strength of the anti-capitalist movement that came at the turn of the century.

Protesters were largely drawn from the untold thousands of unemployed youth, but supporters came from across all demographics. Here were people empowering themselves to challenge the most unpopular government in living memory, so encouragement tsunamied in from mainstream environmental organisations, commentators and the public at large.

On 9th January work began. They came for thirteen trees in a field at the top of the route next to Mary Hare School for deaf children. Protesters repeatedly charged at the lines of security guards, some got arrested but some got through and up three of the trees. After a stand-off, the chainsaw crews went home. That night, a camp was set up among the trees.

Every morning, protesters would patrol the lanes in the area, using CB radio to relay information. As soon as workers were spotted, people descended on the area and charged at the trees. Those that got caught became a diversion that let others through to the trees. The security had no training or insurance to come up the trees; those that were occupied would live to fight another day, and the workers would have to come back.

But as the weeks wore on protesters focused more and more on fortifying their camps. There were over thirty along the route. Some, like Mary Hare and Bagnor, were a few people and even less trees. Others, like Snelsmore, and Rickety Bridge down on the River Kennet, were vast sprawling villages of walkways. Sod what the designers of tower blocks said, these were the real streets in the sky.

Once the main tree felling finished, the evictions of the treehouses began. Rope access workers were brought in with cherry-picker cranes. Huge risks were taken with safety. The evictions’ overseer, Under Sheriff of Berkshire Nicholas Blandy, looked glibly on and said that protesters were fortunate not to live in a country where they’d be machine-gunned from the trees.

As the media grew tired and began to stay away, and as the police became bored with standing round outdoors, so the violence increased. Bailiffs would smash protesters in the face with riot shields. The police would turn and face the other way. ‘They can make a complaint later, if they want to,’ said one officer.

By the time the last tree fell at Tot Hill on 2nd April, the policing and security costs had added £25m to the cost of the road, about 20% of the cost of construction. There had been nearly a thousand arrests.

We lost at Newbury. It was always going to be that way. Contracts had been signed, and there was a lot of money as well as face to be lost. But because of the defeat there, there have been victories elsewhere. The continued presence of the protest in the national consciousness had created the space for real discussion on road building. What had started out being treated as a wacky idea had become a new orthodoxy.

The government cancelled great numbers of road schemes, slashing the roads budget by two-thirds at a stroke and saving the public purse £17bn. Remember that number next time someone complains about the waste of money giving dole to scuzzy hippies in trees. You can walk in places such as the water meadows around Salisbury today and be thankful to those who ignored the law at Newbury that it is not under concrete.

3 Responses to 9th January 1996 – The Third Battle of Newbury