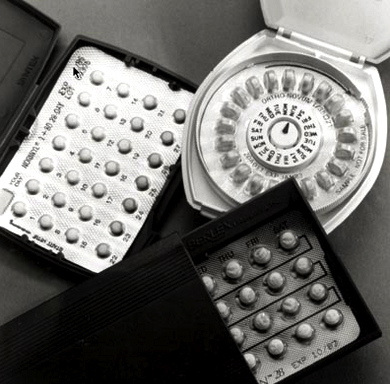 Our bodies, our choice.

The most revolutionary and liberating act for women is surely the availability of The Contraceptive Pill. Before The Pill contraception was a messy, hit-and-miss, often outlawed business. Women in the Ancient World fashioned vaginal tampons from a cocktail of leaves, honey, oils or animal dung. Condoms were made from animal intestines, leather or fine linen. And Casanova favoured the use of half a lemon placed on the cervix before coitus.

It wasn’t until 1839, when Charles Goodyear first vulcanised rubber and manufactured condoms and a proto-diaphragm, that contraception became much more effective than crossing your fingers. Condoms were rightly incredibly popular. But they relied entirely on a man’s willingness to use one. Women were still fucked.

What the girls were crying out for was a simple, private, effective, 100% female-controlled method. One where you didn’t have to fiddle around with unsexy rubber or poke about with pessaries, creams and little foil packets.

By the 1930s scientists had already worked out which hormones were responsible for ovulation and how they could be inhibited. But a way of synthesising progesterone proved tricky and expensive. Pharmaceutical companies seemed reluctant to get involved with the research. It wasn’t until 1951 that hormonal contraceptive research finally began. The first clinical trials took place five years later and on this day in 1960, the US Federal Drugs Administration finally approved the first oral contraceptive. Today, an estimated one hundred 100 million women worldwide now use The Pill. In the UK a third of women of reproductive age do so.

Now, no more fannying about: let’s get real.

“Those who in principle oppose birth control are either incapable of arithmetic or else in favour of war, pestilence and famine as permanent features of human life” – Bertrand Russell

Check out this website and study the net population growth this year number very closely. Whatever you may think of the Chinese government’s controversial one-child-policy there is no doubt that they have at least done something about the global over-population crisis that no one (least of all politicians) dares talk about. Women, armed with information and the contraceptive pill, can avert the crisis. People need education about sex, sexual health, and the benefits of small, planned families right now if Bertrand Russell’s assertion is not to come true in our lifetimes. In some places it already is: Haiti, Rwanda, Bangladesh…

“Contraceptives should be used on every conceivable occasion” – Spike Milligan

Unbelievably there are still governments and organisations around the world who misguidedly advocate abstinence and just-say-no campaigns, while simultaneously judging and condemning girls who have babies ‘out of wedlock’ or very young. This is 1. claptrap and 2. hypocrisy. It is right and natural for young people to explore their sexuality. Irrespective of what the Bishop of Rome says, people want to shag, even if His Holiness chooses to keep his cock in his boxers. Young people especially need to be armed with: accurate information, realistic expectations, the confidence to say yes or no, and the freedom from the risk of pregnancy and disease. For girls this means using The Pill as early as she and her doctor feel able, and for lads it means understanding it’s their responsibility to say: “even if you’re on The Pill, I need to use this condom.”

For those that think that telling kids about sex early leads to early first sex, you are wrong, wrong, wrong. Kids in The Netherlands who learn about sex young, delay their first sexual encounter until the age of 17.

Our Sisters in developing countries need special attention and support. Millions of women, many denied an education and married off shockingly young, suffer poor health, grinding poverty and early death as a result of pregnancy after pregnancy, child after child. It was once like this in the UK. The Pill – and now hormone injections too, which act in the same way – can ease this needless suffering. Combined with the use of condoms to prevent HIV/AIDS, The Pill has the power to transform entire communities.

Now, after a hard day at work or caring for their much-wanted offspring, women in developed countries can kick off their shoes, lie back and make love to their partners free from the fear of pregnancy. But remember girls, The Pill is only 99.7% effective. My daughter’s middle name is 0.3%.