9th May 1976 the Revolutionary Suicide of Ulrike Meinhof 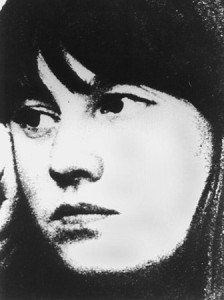 “How can stupidity invade intelligence?” asked Ulrike Meinhof of post-war West Germany’s increasingly capitalistic policies of betrayal. Since her death in 1976 on this day at the age of forty-one, we’ve been asking that very question of her own dilemmatic life and exodus from her leftist (but nevertheless bourgeois) existence to become West Germany’s Most Wanted female terrorist, her name condemned to everlasting infamy as one-half of the media-dubbed “Baader-Meinhof Gang”.  While gun-toting lady guerrillas are a rare enough breed to warrant curiosity and scrutiny, we don’t question or judge the motives of Meinhof’s Red Army Faction sister, Gudrun Ennslin – or Leila Khaled – with anything like the same damnation. What singularises Meinhof is her social background and her choices. This formidably intelligent woman deserted her comfortable life, successful career, compatibly-thinking husband and young twin daughters in favour of guerrilla warfare training in Jordan, bank robberies, bomb attacks, kidnappings and targeted murders. Meinhof was captured on June 14th 1972 and, in 1974, sentenced to eight years in prison. In 1975 she was additionally charged, alongside Andreas Baader and Gudrun Ensslin, with four murders and fifty-four attempts to murder. It was during the long trial that she became withdrawn, divided and evermore alienated from her co-defendants and, on the morning of 9th May 1976, she was found hanged in her cell. The official verdict was suicide, though her comrades and conspiracy theorists insisted she was executed.

Ulrike Meinhof was already radically politicised before her line-crossing moment of destiny on 14th May 1968 when the audacious plan to break out the incarcerated Baader went wrong. In a nanosecond, Meinhof was no longer a mere conspirator but an accomplice to attempted murder, and there was no going back. From 1960-68, she had been a hugely influential journalist of minor celebrity for the left-wing publication konkret. But as the decade came to a close and it became ever clearer to the genuinely committed that the times were not a-changing, her writings became increasingly desperate and intolerant. She was no doubt spellbound by the rock’n’roll Andreas and Gudrun, and Baader’s quasi-religious rhetoric guilted and goaded her into a ‘are you going to be part of the problem or part of the solution’ response.

With a hindsight that can only be informed by how horribly wrong it went for Meinhof and the Red Army Faction, it is all too easy to dismiss them as deranged and deluded for ever believing they could create a stir that would inspire the masses to join in and overthrow West Germany’s capitalist system. But do we lump them in with Charles Manson, or Che Guevara? Depending on which side of the fence you’re on, it can be an ambiguously fine line between activist/freedom fighter/revolutionary vs. terrorist/murderer/maniac. But in casting our judgment, we must also consider the motives of Meinhof and her fellow guerrillas – though from the comparative apathy of the early 21st century, it would be nearly impossible to imagine how desperate the 1960s radicals must have felt as they helplessly watched their dream slipping away; and harder still to imagine the burden of guilt, need for atonement and fear of inaction that Germany’s Children of Hitler would have carried.

Ulrike Meinhof remains an enigma – a “historical riddle”, as Nobel Prize winner Elfriede Jelinek describes her in the introduction to a compendium of Meinhof’s konkret writings, Everybody Talks About the Weather…We Don’t – the powerful title being one of Meinhof’s own quotes. Red Army Faction historian Stefan Aust believes she “suffered under the injustice of this world,” and perhaps that hints at the only satisfactory answer to this ‘historical riddle’. For Ulrike Meinhof, there was no other choice. As JFK said, “Those who make peaceful revolution impossible will make violent revolution inevitable.”