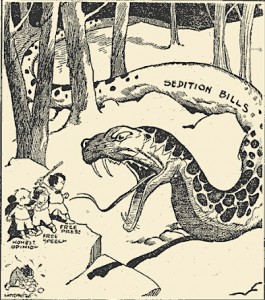 “Congress shall make no law…abridging the freedom of speech,” states the First Amendment to the US Constitution. Except when it suits Congress. And ninety-nine years ago today, President Woodrow Wilson pushed through the Sedition Act of 1918 – a blatant breach of the most sacred of constitutional rights and what historian Geoffrey R. Stone calls “the most extreme anti-speech legislation” in American history.

In the repressive hysteria that followed America’s entry into World War One, the Sedition Act was an even more egregious amendment of the 1917 Espionage Act, which criminalised interference with the war effort or military recruitment. With utter dictatorial disregard for freedom of speech, Congress outlawed any utterance or expression of opinion that cast the government, the flag, the Constitution, military or war effort in a negative light. Dissent of any kind whatsoever was effectively gagged. Pacifists and other outspoken opponents of the war – of which there were many – were branded unpatriotic and disloyal criminals. Over 1000 dissidents were sentenced from 10 to 20 years in prison – often for merely passing out leaflets, engaging in discussion on street corners, or attending a meeting. Eugene Debs, who’d received more than a million votes as the socialist candidate for president five years earlier, attacked Wilson’s efforts to silence dissent: “It is extremely dangerous to exercise the constitutional right of free speech in a country fighting to make Democracy safe in the world.” For this he was sentenced to 10 years in prison.

And just like Dubya’s post 9/11 Patriot Act (extended by Obama), Wilson’s bill was used as an opportunistic smokescreen to erode individual liberties of ‘undesirables’ in the name of national security. By criminalising the mere suggestion of any anti-American sentiment, the Sedition Act provided a convenient excuse to target, prosecute and, when possible, deport immigrants, labour activists and radicals – especially anarchists, Wobblies and socialists – whose movements had gained considerable momentum.

As evidenced by Nazi Germany’s heroic resistance movement the White Rose, wartime dissent can be the very essence of responsible and courageous citizenship. And the great irony of the Sedition Act is that history has shown the anti-WWI voices of dissent were in truth the most patriotic of all. As Howard Zinn asserted, in that utterly pointless war where over 30 million died in battle, of hunger or disease “…no one since that day has been able to show that [World War I] brought any gain for humanity that would be worth one human life. The rhetoric of the socialists, that it was an “imperialist war,” now seems moderate and hardly arguable.”