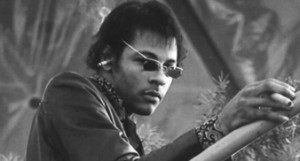 Today we honour Arthur Lee – the African American protest singer, metaphysical poet and leader of LA’s pioneering psychedelic refuseniks Love – who quit this planet on this day in 2006 after an arduous battle with cancer.

Like Lou Reed, Arthur’s work was almost entirely ignored in the ‘60s because he was too at odds with the zeitgeist – thereafter gaining popularity not with black-power audiences but with white intellectuals and psychedelic freaks who found themselves drawn to his highly erudite, overly wordy and wholly apocalyptic world vision. And therein lies the irony in his legacy: at the peak of the civil rights movement, when other black musicians were celebrating their afros and skin colour, Arthur Lee was making his personal revolutionary statements in a style that was quintessentially white. By the time he pitched himself into black consciousness, even fewer people were listening. None of this, however, changes the overriding fact that Arthur Lee was a total genius and a supreme psychedelic motherfucker.