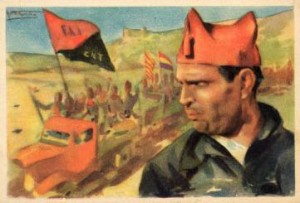 Today we remember the inspirational life of the anarchist military leader, Buenaventura Durruti, who died on this day 1936 in a mysterious and hotly disputed shooting accident. For although his death occurred a mere four months into the Spanish Civil War, Durruti’s leadership of the legendary Column to which he gave his name, combined with the rigorous, even heroic manner in which he’d practiced his anarchism – gun running, robbery and even attempted assassination of the Spanish monarch Alphonso XIII – made him the emblem of the entire Catalonian anarchist movement. For Durruti was a truly militant anarchist, a man for whom even the concept of leadership was highly questionable. But for the Barcelona anarchists of 1936, their unexpected success confronted the very core of their ideals as anarchist militia found themselves policing public situations. And yet Durruti’s familiar red-and-black military cap, always worn at a jaunty angle, made him look not like other contemporary military authoritarian figures but instead like some harlequin lawman: with hindsight, a perfect metaphor for the blip in the social order which this strange period tragically turned out to have been.

With the working-class revolution in full flow, Durruti took charge of his own anti-fascist militia unit – the celebrated Durruti Column – which initially consisted of around 2,500 men and women volunteers, rising to numbers of 10,000, causing Durruti to declare: “We are giving Hitler and Mussolini far more worry with our revolution than the whole Red Army of Russia. We are setting an example to the German and Italian working class how to deal with fascism.” And yet the revolution was quickly eclipsed by Spain’s civil war. When fascist troops entered Madrid, anarchist leaders and their Republican allies clamoured for Durruti and his militia to bolster the defence of the city. Tragically, however, this was where Durruti would die at dawn on 20th November 1936, receiving a bullet to the chest as he rallied his militia to continue their resistance after days of fighting without respite.

And when his body was returned to Barcelona, over 500,000 people took to the streets to follow the funeral procession, Durruti’s coffin draped with the familiar diagonal red-and-black flag.

4 Responses to 20th November 1936 – the Death of Buenaventura Durruti