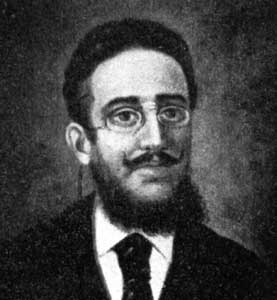 On this day in 1897, in the tiny Spanish spa town of Santa Agueda, Spain’s autocratic and much-hated prime minister Cánovas del Castillo was assassinated: gunned down as a final act of revenge by an Italian anarchist who could no longer tolerate this Spaniard’s decade-long policies of Neo Inquisition-style repression. For the brutal Medieval-style torture of Castillo’s enemies – from mainland Spain to its American colonies – had long included the burning of victims’ flesh, the breaking of their bones, even the removal of their tongues.  To the insufferable autocrat Cánovas del Castillo, such modern concepts as Universal Suffrage and Freedom of Religion could be met with only one response: brute force. But while the extreme sufferings of his Cuban colonists had long been the subject of international debate, it was right here on the Spanish mainland itself that Cánovas would perpetrate his worst crimes, concentrated acts of such bloodlust and bitterness that they would only drive ‘his’ people away from such pro-royal, pro-church nationalism towards those concepts of Catalan and Basque Separatism that still resound even today.

But the infamous incident which precipitated Cánovas del Castillo’s assassination – his singlemost controversial and most pivotal action yet perpetrated against the Spanish people – occurred in Barcelona, during the Corpus Christi Day processions of June 7th 1896, when a bomb – thrown by an unknown, and apparently randomly – succeeded in killing five Spanish workmen and a policemen. Using this as an excuse for more extraordinary brute force, Cánovas del Castillo had over 400 arrested and incarcerated inside the hilltop fortress of Montjuic (‘the hill of the Jews’), where torture, squalid conditions and the insufferable Mediterranean summer heat killed many as they awaited trial.

On hearing the accounts of Cánovas’ policies directly from the mouths of fleeing Spaniards who had suffered under his dreadful policies, the London-based Italian anarchist Michele Angiolillo decided that extreme action must be taken immediately. And so, traveling to Spain with just a small suitcase containing a few sticks of dynamite and two revolvers, Angiolillo followed his target to the spa town of Santa Agueda, where – on the afternoon of August 8th – he shot and killed Cánovas del Castillo just as the prime minister sat enjoying the spa waters. The assassin was at once apprehended but offered no resistance. Angiolillo was put before a summary court martial and confessed to the assassination, insisting that he had acted alone as a reprisal for the institutional murder of his comrades at Montjuic. He was sentenced to death on 20th August 1897. To the spectators who had come to view his execution, Angiolillo’s final word was “Germinal” – being the seventh month of the French Republic calendar. Having at no time during his trial nor during the days leading up to his execution shown any sign of remorse, Angiolillo then walked calmly to his execution by strangulation at the garrote.

Several days later, at a New York celebration of Michele Angiolillo’s heroic actions, the Italian anarchist Salvatore Pallavencini emphatically declared the anarchist position thus: “The man who killed Cánovas was a martyr to the cause of humanity and progress.” He concluded: “Anarchists think it is better to kill a ruler who is a tyrant than to have a revolution in which thousands have to die because of his acts.”