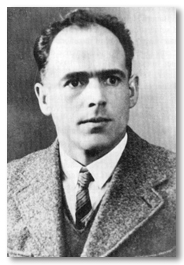 It can be surprising to discover that so thoroughly indoctrinated were the Germans under Hitler’s Nazis that their cruelty towards non-Nazis did not halt abruptly in May 1945, as Prussians, Bavarians, Saxons, Hohernzollerns alike awoke from their collective psychosis. Instead Nazi Germany’s now-leaderless masses – despite military occupation by the Allies – continued for some time to display more than mere vestiges of their unholy late Führer’s repulsive influence resulting in further unnecessary misery to many long-suffering German innocents. One of those unfortunates – the wife of today’s On This Deity subject – was the Austrian Franziska Schwaninger, whose postwar pension was cruelly withheld from her until 1950 by the local authorities in her home town Sankt Radegund purely because of her late husband’s heroic refusal to compromise his devout Catholicism by fighting as a soldier of the Nazis. Worse still, successful and influential local Catholics who’d thrown in their lot with the Nazis conspired to erase any memory of her husband by keeping his name off every war memorial in the municipality. Indeed, these postwar Nazis may well have succeeded in submerging the actions of Franziska’s heroic husband, had not his story been unearthed and recorded by the American sociologist, Gordon Zahn, in his 1964 biography In Solitary Witness.

In April 1938, Franz Jägerstätter – an uneducated farmer and devout Catholic – was the only person in his village to cast a vote of dissent against the Nazi’s cynical plebiscite to ratify Austria’s de facto annexation to the Third Reich the previous month. He managed to avoid conscription to the German Wehrmacht through exemption as a farmer until his third call-up in February 1943. Prepared to ignore the order, and withstanding local scorn and criticism, Jägerstätter was stunned when both his pastor and the bishop of nearby Linz counselled him to comply and serve for the sake of his wife and three young daughters. He was so appalled by the weakness of these religious leaders and their willingness to abandon the principles of their faith that he came to the ultimate damning conclusion:

Actually, we should be ashamed of ourselves in comparison with the truly committed [Nazi] Party member who, for his part, even though his faith was rooted only in worldly things, fought for his ideals and for his National Socialist ideology in the face of all prohibitions and did not even fear prison or death … Would they have achieved their victory if they had been as timid and cowardly as we Catholics of Germany are today?

Upon reporting for duty, Jägerstätter at once declared himself a conscientious objector and was duly arrested and condemned to death for “undermining military morale”. Early on 9th August 1943, he was taken to Brandenburg-Gordon prison where, at the age of thirty-six, he was beheaded by the guillotine. Despite the inspirational efforts of his devoted and devout Catholic wife, her campaign to clear her husband’s name fell upon deaf ears until Gordon Zahn – himself a World War II conscientious objector – brought the story to light with the publication of In Solitary Witness. A Berlin court finally nullified the criminal verdict and death sentence in 1954 and, as a further result of Zahn’s book, Jägerstätter’s story captured the attention of modern Church authorities. On 26th October 2007 in the presence of 94-year-old Franzisca and their three daughters, Jägerstätter was beatified in Linz Cathedral. A Vatican cardinal delivered the eulogy that, in acknowledging the resolute faith of such a simple man, challenged those Catholics and church leaders who abandoned theirs when it was put to the test: “… the testimonial of Blessed Franz, his unbroken bravery, and his imperturbable strong conscience is a shining example [for Christians] to live their faith with coherence and radical commitment, even accepting extreme consequences if necessary.”

“If the Church stays silent in the face of what is happening, what difference would it make if no church were ever opened again?” – Franz Jägerstätter

9 Responses to 9th August 1943 – the Death of Franz Jägerstätter